Mortal Republic by Dr. Edward J. Watts is a welcome take on the Roman Republic's transformation into an autocracy. Watts' lucid writing and sharp analysis make this roughly 300-page trek through Roman social and political history an enjoyable one. The book's quality illustrations and extensive endnotes deepen its value as a learning resource. Although the period in question has already been extensively studied, Mortal Republic represents some of the best that current scholarship has to offer. 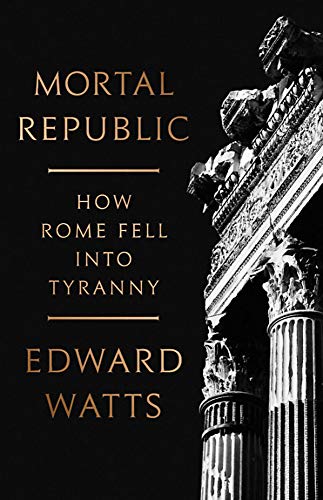 In 12 chapters, Mortal Republic traces the Roman Republic’s transformation into an autocratic empire by looking at key economic, social, and political developments. This book attempts to explain the death of the Roman Republic as its transformation from a political system based on prestige and adherence to tradition, to a zero-sum game based on personal competition. Although this book is written to be accessible to a general audience, it would be a valuable addition to the avid historian’s bookshelf.

Are there lessons to be learned in Rome’s metamorphosis from a republic to an autocracy? Dr. Edward J. Watts prefaces his book by noting the value in consulting ancient history to understand more recent events which might defy explanation at first glance. In particular, Watts’ highlights the parallels between Rome’s Republic, and the modern republics modelled after its example. To its credit, the book does not dwell on these parallels, and the trajectory of Roman history is analyzed on its own merit.

The first chapter examines the fragility inherent in a republican political system, and describes the checks and balances which allowed the Roman Republic to be as long-lived and as successful as it was. Watts’ lays out his goals for this book here, which is to explain why the Roman Republic lasted for as long as it did, and why this ultimately changed so dramatically in the 1st Century BCE.

The ideas of the first chapter provide the framework for Watts’ analysis as he traces the economic and political trajectory of the Roman Republic throughout chapters two and three. Readers unfamiliar with the military and political history of the Roman Republic will be guided through this turbulent period with ease, and readers familiar with this period will no doubt find it a useful and concise recap of the most important developments. Following Rome’s victory in the Punic Wars and the Macedonian Wars, the Republic’s economy was forced to grow in complexity to match its expanse. The book draws a relationship between the increased wealth available to the Roman political elite following Rome’s conquests in the 2nd Century BCE, and the growing importance of savvy financing to maintain power and prestige in Rome.

The widening economic gulf between Rome’s wealthy aristocracy & its increasingly impoverished underclasses helped to set the stage for populists.

Chapters four through six pick up the story after Rome’s destruction of Carthage and Corinth, after the Republic had become the dominant power in the Mediterranean. Watts highlights what he sees as the Roman state’s inability to rapidly adapt to the changes which had occurred over such a brief period. The widening economic gulf between Rome’s wealthy aristocracy and its increasingly impoverished underclasses helped to set the stage for populists who were able to take advantage of the atmosphere of uncertainty and frustration. The unorthodox careers and violent deaths of figures like the Brothers Gracchi are given special attention as developments which inadvertently shaped the course of history by introducing political violence to Republican Rome.

However, the book does not only focus on the individual players at the expense of the greater whole. Watts carefully and concisely goes over the political upheaval of the Social War and the threat it posed to Rome’s control of Italy, as well as the economic shockwaves caused by Mithridates VI’s conquest of Roman Asia. Readers are led each step of the way along the path to full-blown civil war, culminating in the bloody conflict between Marius and Sulla in the 80s BCE.

Chapters seven through nine examine the condition of the Roman Republic after the dictatorship of Sulla. The book goes over the main beats of the Sertorian War, Spartacus’ revolt, and the rise of charismatic leaders like Pompey the Great (106 – 48 BCE) and Julius Caesar (100 – 44 BCE) without getting bogged down by this chaotic era’s twists and turns. Readers are left with the distinct impression that the Roman Republic had changed radically, even if Romans at the time were not entirely sure as to what their republic had become just yet.

The momentum of the book steadily builds up to this point, and is maintained in the final three chapters. Watts’ clear and lucid writing makes easy reading of complicated political and cultural shifts. Famous events such as the assassination of Julius Caesar (March 15, 44 BCE) and Octavian’s war with Antony and Cleopatra loom large over Roman history in chapter ten and eleven. The final chapter follows the rise of Augustus (r. 27 BCE - 14 CE), Rome’s first emperor and closes the book with the birth of the Principate.

The subject matter of this book has been tackled by authors from Edward Gibbon to Mary Beard, but Dr. Watts makes a valuable contribution to existing literature. Watts’ writing is just as vibrant and engaging as ever, and his firm knowledge of Roman social and political history shines through. Extensive endnotes and in-text quotations from ancient sources add to the value of this book for students and historians. A picture’s worth a thousand words, and Mortal Republic also features numerous high-quality illustrations, maps, and photographs.

This timely book addresses the dangers of exchanging freedom for security, and of introducing violent rhetoric into a republican political system. I highly recommend this book to anyone interested in a general history of the Roman Republic, a chronicle of the birth of the Roman Empire, or a study of the fault lines which threaten the stability of republics.

Enemies of Rome in the 3rd Century CE

It has been said that the greatest enemy of Rome was Rome itself...