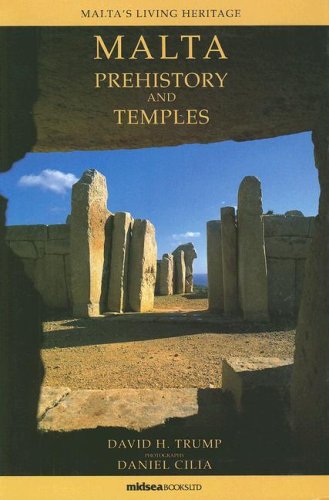 How could a Neolithic society operating at a level that produced only slightly more than subsistence level support such complex architecture and art far in advance of that of the nearest and more distant cultures? This is the question David Trump poses on page 234 of ‘Malta Prehistory and Temples’, a question that must stir the mind of anyone interested in prehistoric archaeology.

It is a question very difficult to answer, unless you are inclined to subscribe to the fringe theories of Aliens and spacecraft. Trump does not fully answer it, I don’t think anyone with modern sensibilities could, but in the course of this excellent book he comes as close as is possible and leaves us with a sense of wonder. The Neolithic cultures of the island produced a range of buildings and artefacts that make Malta a treasure chest for those interested in the ancient world.

It is worth remembering when faced with these temples; the earliest of their kind, that they were built before the pyramids or the megalithic structures of Western Europe. This means it is highly likely that the inspiration came from within the island and its farming communities. Built by people without cities, written records or the lavish grave goods which would indicate the control of a powerful elite. They were built by the people of simple rural communities who took architecture and pottery styles to new levels.

Trump charts the increasing complexity of the temples and the curious and unknowable clues to the beliefs and mind sets of the people who built them. He investigates the elements of ritual and examines the suggestion of a powerful priesthood. Of particular interest in this is the presence of small scale models of the temples which possibly give us insight into the minds of the ancient planners and architects.

As I suppose is fitting with such an enigmatic society, the end when it came, came quickly, sometime around 2500 BCE. We can chart the end of this society but are left with no smoking gun as evidence to why and how. There is nothing in the archaeological record indicating war or destruction. The reasons for its decline are as unknowable as those for its birth. In this way the book poses another intriguing question: Who were the people who replaced the temple builders and why is there no evidence of continuity? Trump presents an image of one culture vanishing and another, poorer in cultural terms, arriving. Rather like a modern house move.

Trump’s book combines a site by site guide with an introduction to the culture and an attempt to unravel some of the questions. It is beautifully illustrated by photographer Daniel Cilia, well written, and, by the finish, it is difficult not to be amazed by the richness and inventiveness of the people who built these temples. An excellent and thoroughly enjoyable read as well as the best work of reference on prehistoric Malta currently published. Sadly, it is not easy to get hold of and I bought mine in the excellent archaeological museum in Valletta.

$45.08
plus shipping
By purchasing books through this website, you support our non-profit organization. Ancient History Encyclopedia receives a small commission for each book sold through our affiliate partners.

The Dolmens of Sicily

It is a well-known fact that Sicily, the largest island in the...
Article

ArchaeoConcept is an independent company based in Biel, Switzerland...
Article

There are at least a thousand reasons to visit Sicily, the great...

$45.08
plus shipping
By purchasing books through this website, you support our non-profit organization. Ancient History Encyclopedia receives a small commission for each book sold through our affiliate partners.
Remove Ads