The Making of the Middle Sea: A History of the Mediterranean from the Beginning to the Emergence of the Classical World 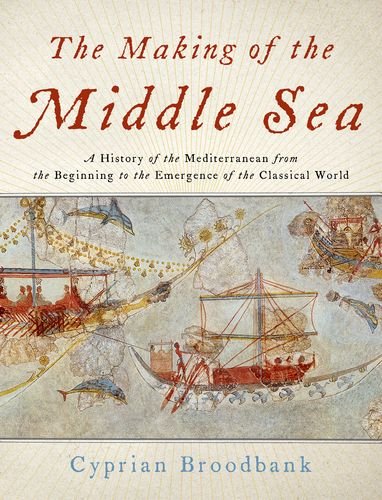 This massive volume of 671 pages is described as a history of the Mediterranean from the beginning to the emergence of the classical world. It fills a necessary gap in the market as there has been little holistic exploration of how the societies and cultures of the region first came into being and subsequently developed. For anyone interested in the diversity in the development of a succession of Mediterranean cultures this is an invaluable resource.

This volume is well illustrated and particularly effective in demonstrating how the subsequent cultures evolved, merged, ebbed, flowed and dissolved over the millennia. People come and go but the sea itself is the centrepiece of this work and its controlling influence is stamped across every page.

I was particularly interested in the picture presented of the Neolithic from its transient shifting emergence to the beginnings of empire.  Broodbank handles the evidence for complicated transition with great skill. But whatever your particular sphere of interest in the ancient world there is a new slant or reconsideration of old arguments to provoke thoughts. In fact this is one of the first overall treatments of the topic to give equal treatment to many of the lesser known elements that are often covered only by a footnote. This is not the case here as the book rolls across time and region and the diverse nature of cultures from the Saharan fringe to the Iberian coastline giving a picture of the differing challenges facing each.

I was particularly impressed with the section dealing with the period between 5500 and 3500 BCE, an age of regional variation and innovation ending with the widespread use of metals. The creativity of this period is explored in an enthralling chapter entitled ‘How it might have been’. Here the possibilities of this last burst of “Pan Mediterranean anarchy” are considered before local ways of doing things were overcome by the economies and organisation of putative empires.

A book of this nature can often descend to a dry list of achievements and systems, so how does Broodbank avoid this? The first answer to this is that the early formation of the area that became the Mediterranean and its first inhabitants are imbued with a sense of wonder. Although a criticism of the book has been that the language is somewhat academic and staid the presentation of the material more than compensates for that. Broodbank has a story to tell and that is the spine of the book. I was sorry to finish reading it.

Pirates of the Mediterranean

The pirates of the ancient Mediterranean were not, for the most...
Article

Driven by their desire for trade and the acquisition of such commodities...

Broodbank, C. (2015, October 26). The Making of the Middle Sea: A History of the Mediterranean from the Beginning to the Emergence of the Classical World. Ancient History Encyclopedia. Retrieved from https://www.ancient.eu/review/91/

Broodbank, Cyprian. "The Making of the Middle Sea: A History of the Mediterranean from the Beginning to the Emergence of the Classical World." Ancient History Encyclopedia. Last modified October 26, 2015. https://www.ancient.eu/review/91/.