WARFARE IN THE ANCIENT WORLD 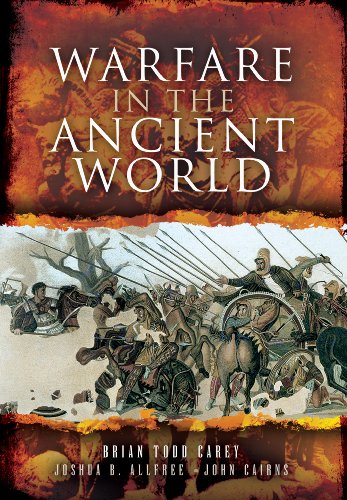 "Warfare in the Ancient World" by Brian Todd Carey Is a book that not only explains warfare but why certain major events took place during ancient times. The book goes from the depths of the ancient Sumerians to the late Roman empire, a period of several thousand years. Though this may sound like a deep, dry read, it is the opposite. Carey does what most historians have problems with and that is keeping history from becoming a fact dump. While a multitude of readers like me enjoy fact dumps about history at times, this book proves that you can share history in a gripping, enlightening way.

"Warfare in the Ancient World" is a solid read that challenges the reader with a depth and knowledge that aren't found in many books covering the ancient world. It takes time where it needs to, describing wars and reasons for why they happened, battles, the famous generals and armies involved, explaining maneuvers and placements, while also explaining why one side won and the other didn't. It also goes into detail on the ancient nations’ ways of waging war with the weapons and armor they used. Recommended for any aspiring historian, military historian or someone looking for challenging non-fiction.

One of the best aspects of this book is every time a new form of warfare is introduced, Carey explains this new form of war in a way that is enlightening and insightful. What makes this part stand out is the "how" part. Not only does he describe the arms and armor being used, but why each side had those particular arms and armor, as well as variations of each. About half of the Egyptian/Sumerian way of waging warfare was entirely based on the war chariot. Not only is the material in which chariots were made described, but how the chariots were made (i.e. the chariot spokes were further up on the chariot carriage or further back, depending on the nationality). He also describes the origins of the arms and armor used by these armies, revealing unusual fact that might make even a military historian realize he is learning a thing or two from this book.

Of course, the major focus of the book is the battles. Battles such as Megiddo and Adrianople are where all these arms and armor were used, so they’re illustrated with multiple diagrams and maps to explain what exactly was happening in these clashes. Above these battles though are the wars in which these battles take place in. Corey explains the reasons for the wars and conflicts in the ancient world, smoothly sharing the narrative about the wars, as well as the famous generals and characters involved.

Though these aspects are both excellent, I must warn the potential reader that this is a very dense book because it was written so that military students could use it for papers and future tactical situations. Still, don't be discouraged just because it is dense. You end up learning a lot more than you expect. I myself was surprised on how much I learned and how I gained a greater understanding on the specific details of what warfare in the ancient world was really like, and how it reflects today's style of warfare, in such areas as tactics and battlefield movements.

The third and the best part of the book was the narrative and reoccurring ideas. As he travels through the details of the ancient world, Carey takes his time to explain the common theme of the styles of warfare. An example is when he compares the Persian and Greek ways of waging war: with the Greeks primarily using a heavy infantry line composed of phalanxes, while the Persians used a lighter line composed of spearman and archers. Carey points out how warfare evolved to the point of the pinnacle of ancient warfare: the Roman legion. In short, he makes a military narrative that no other book I have encountered has accomplished.

I highly recommend this title to any history enthusiast or aspiring historian, as it is a solid read with endless facts and knowledge that a reader cannot find everywhere. With the combined knowledge of how battles and wars were fought to the minuscule details of how armor and arms were used, this is a unique resource for anyone looking for an in-depth, challenging history read.

$15.14
plus shipping
$23.31
free shipping worldwide
By purchasing books through this website, you support our non-profit organization. Ancient History Encyclopedia receives a small commission for each book sold through our affiliate partners.

The navy in ancient India carried out three roles: it was used...
Article

The crossbow was introduced into Chinese warfare during the Warring...
Article

$15.14
plus shipping
$23.31
free shipping worldwide
By purchasing books through this website, you support our non-profit organization. Ancient History Encyclopedia receives a small commission for each book sold through our affiliate partners.
Remove Ads