Handbook to Life in Ancient Mesopotamia 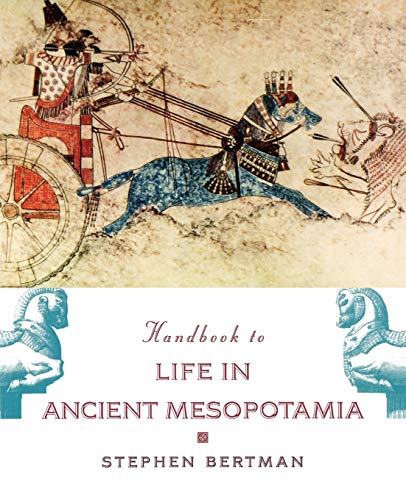 Handbook to Life in Ancient Mesopotamia by Professor Stephen Bertman is an indispensable treasure for anyone interested in the history of the Near East. The book is formatted for easy reference of topics ranging from the Geography of Mesopotamia (Chapter 1) through Religion and Myth (Chapter 4) to the Legacy of Mesopotamia (Chapter 13). Each chapter presents the subject under consideration broken into sub-sections for ease of reference. Chapter 1, for example, provides a table listing the ancient and modern names of the cities of Mesopotamia and then brief descriptions of each city which provide a reader with a mini-history of each. These small histories are then expanded upon throughout the rest of the book.

The format is similar to an encyclopedia but with longer and more detailed entries (as with cities) or with shorter ones (such as the list of rulers in Chapter 3 or that of the gods in Chapter 4). However long or short, the basic information is then presented in greater depth either at the beginning of a chapter or later on. Chapter 4, on Religion and Myth, is typical of this in that the author begins with an overview of the Mesopotamian view of the gods and then goes into greater specifics through the names of the gods and their function. An excerpt provides an example:

According to a tradition that began with the Sumerians, human society was patterned on a plan conceived by the gods. To fulfill this organizational plan, operational rules had been devised to govern human activities and behavior. These rules were collectively known as the me (a Sumerian plural pronounced “may”, and referred to in Akkadian as parsu). The me defined such aspects of civilization as government and religion, war and peace, sexual intercourse (including prostitution), art and music, and crafts and professions, as well as such abstractions as truth and falsehood, and sadness and joy. The implementation of the me was supervised by the gods, especially by An (Akkadian, Anu) the god of creation, and Enlil (Akkadian, Ellil), heaven’s chief executive ((115).

Well written, engaging, and easy to use, Professor Bertman’s book will appeal to anyone interested in Mesopotamian history specifically or ancient history in general. The work would serve well as a class textbook in college courses on history, religion, sociology, or anthropology. As a reference work for writers on the topic, it is a valued resource. Highly recommended.

$24.99
plus shipping
$25.79
free shipping worldwide
By purchasing books through this website, you support our non-profit organization. Ancient History Encyclopedia receives a small commission for each book sold through our affiliate partners.

Daily life in ancient Mesopotamia cannot be described in the same...
Article

Mesopotamia is the ancient Greek name (meaning “the land...
Article

$24.99
plus shipping
$25.79
free shipping worldwide
By purchasing books through this website, you support our non-profit organization. Ancient History Encyclopedia receives a small commission for each book sold through our affiliate partners.
Remove Ads