Babylon: Mesopotamia and the Birth of Civilization 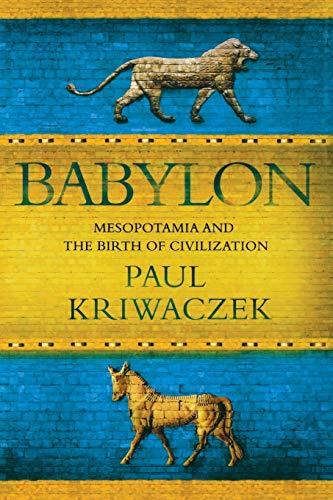 Babylon: Mesopotamia and the Birth of Civilization, by Paul Kriwaczek, is a highly readable, engaging work which presents the history of Mesopotamia clearly and comprehensively. An essential addition to the library of anyone with a passion for Mesopotamian history, the book would also appeal to a reader interested in history in general and the development of culture and civilization in the ancient world. Kriwaczek moves easily between the past and the present and draws some cogent and insightful parallels between the two. Among the many topics he addresses are the development of writing and the story of the Great Flood. An excerpt:

Cuneiform writing was not just used for high literary purposes, of course. It also set down the very first contemporary records of people and events. From now on whatever happened in the world need never be forgotten. And though much appreciated by archaeologists 5,000 years later, the real impact of this development was on its own world, which was radically transformed…At the end of the fourth millennium BCE a simple accounting technique using clay tokens was elaborated in the City of Gilgamesh [Uruk] into a sophisticated, versatile and flexible writing system, the achievement that marks the moment when true history begins. But for every new beginning there must be an ending of what came before. A division line is drawn. That was then; this is now. (65).

The division line Kriwaczek refers to is the Great Flood which is best known through the biblical Book of Genesis but which was first detailed in the Mesopotamian work, the Atrahasis, centuries before Genesis was composed. The Flood became the demarcation between the old world and the new and the base-line by which the written word would then record history. Whether the Flood ever actually happened, Kriwaczek claims, is not then as important as the significance the story had to the people of ancient Mesopotamia.

The topics of writing and the Flood, however, are only two of the many touched on throughout the book. While one might think Kriwaczek only focuses on Babylon, owing to the title, he actually begins before the rise of the Sumerian cities and traces the history up through Babylon and then beyond. An excellent work in every respect. Highly Recommended.

$20.99
plus shipping
$21.67
free shipping worldwide
By purchasing books through this website, you support our non-profit organization. Ancient History Encyclopedia receives a small commission for each book sold through our affiliate partners.

The Mutual Destruction of Sennacherib & Babylon

The reign of Assyrian king Sennacherib (705-681 BCE) was chiefly...
Article

$20.99
plus shipping
$21.67
free shipping worldwide
By purchasing books through this website, you support our non-profit organization. Ancient History Encyclopedia receives a small commission for each book sold through our affiliate partners.
Remove Ads