by James Lloyd
published on 17 March 2013
Send to Google Classroom: 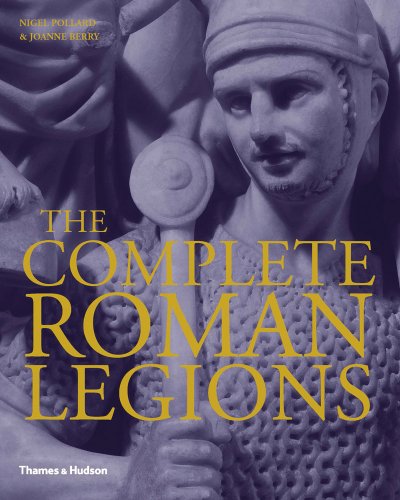 This book is a brilliant addition to Thames and Hudson’s series on the Ancient World. This volume, co-authored by Nigel Pollard and Joanne Berry, lecturers of Roman History and archaeology at Swansea University, is a great general account of the Roman Legions. Beautifully illustrated, clearly laid out, and well-written, it is primarily for a general audience, but the references to and quotations of ancient authors, supplemented with a fairly thorough section on ‘further reading’, mean that it can be used by university students to gain basic, and important information, before developing one’s own thoughts further by assessing the sources used (archaeological too) in more academic detail (it is worth noting the absence of footnotes).

As a reference to the Roman Legions, a better book could not be asked for. Divided into three sections, the first part of the book looks at the legions in the republican period, the second part explores the legions of the imperial age, and takes up the vast majority of the book (it is in this section that a brief history of each legion is given), whilst the third part discusses the legions in late antiquity. These three sections are complimented with an introduction which highlights some of the problems in trying to write up individual histories for the legions; a three page chronology of the major wars, campaigns, rebellions and ‘disasters’ of Rome, starting with the sack of Rome by Gaul in 390 BCE, and ending with the last Roman emperor on the West, Romulus Augustulus, being deposed by Odovacer in 476 CE. Very useful, in particular to the more general reader, is the two page glossary.

In total there are 212 illustrations, 204 in colour, and most of the time they tend not to distract from the text but compliment it very well, for example, when discussing the building of forts, it helps the reader to understand the process, and how the Romans understood the process themselves, if a picture depicting soldiers constructing a fort from Trajan’s column is included (as it is). Furthermore, the many maps (11 in total) are incredibly useful in perceiving the sense of scale and location of the Roman army, especially when your ancient geography is limited to the city states of Ancient Greece, as mine is! To complement the prose of the book, various ‘data boxes’ are included, which help to summarise such things as each Legions’ cognomina, emblem, main base, and main campaigns.

Overall, this book is a brilliant guide and introduction to the Roman Legions that takes into account both literary and archaeological evidence, and its clarity of presentation makes it perfect for a general audience. Despite its lack of footnotes and engagement with issues of academic debate (at least in great detail) it is still of use to the student or more academic reader, since it acts as a brilliant reference for what is in effect the organisation that protected Rome and expanded her rule throughout her long lifetime; the Roman Legion.

$36.66
plus shipping
By purchasing books through this website, you support our non-profit organization. Ancient History Encyclopedia receives a small commission for each book sold through our affiliate partners.

James Lloyd
James' main area of research is ancient Greek music, but he has general interests in mythology, religion, and art & archaeology. A self-confessed philhellene, James keeps at least one eye on the Roman pie.

The Battle of Philippi 42 BCE

The Battle of Philippi in 42 BCE was an all-Roman affair fought...
Article

The Battle of Pharsalus

Pharsalus, in eastern Greece, was the site of a decisive battle...

$36.66
plus shipping
By purchasing books through this website, you support our non-profit organization. Ancient History Encyclopedia receives a small commission for each book sold through our affiliate partners.
Remove Ads