The Oxford Handbook of Hellenic Studies 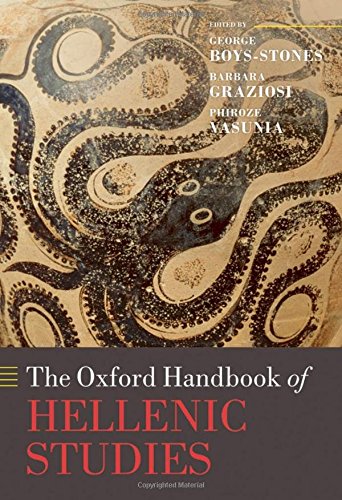 Another excellent book from the Oxford Handbook series with sixty-eight chapters arranged by theme, each written by a leading scholar in that particular field. Topics covered include literature, theatre, politics, philosophy, warfare, trade, and society. Strong on the literary arts it is strangely brief on subjects which are usually the staple topics of general history books on Greece, for example, Greek pottery, the Peloponnesian War and famous personalities are only ever indirectly referenced. However, these omissions do allow space for more unusual areas to be given their own chapters, for example, medicine, magic, music, science and travel within Greece in ancient times.

The title of this book is suggestive. This is not just a history of Greece but also a history of the study of ancient Greece. Accordingly, the first 150 pages or so of the book discuss the history, approaches and debates within Hellenic studies and the final 150 pages discuss areas of future research and possible developments in methodology. However, packed between these two parts are some 500 pages of concise subject overviews which, when read as a whole, give the reader an excellent and up-to-date vision of the ancient Greeks.

Alas, there are no images or illustrations and certainly a few maps wouldn't go amiss to orientate the reader but perhaps this is indicative that the book is not really aimed at beginners but those who have studied or are studying the various subjects covered. The texts are often loaded with references to scholars both past and present and this can sometimes distract, indeed, certain chapters sometimes read like private correspondence between academics and the ability of each writer to fully engage the reader is variable. However, many chapters are of interest to the general reader, especially one concerned with accurate and up-to-date information. In addition, as each chapter has a suggested list of further reading and an extensive bibliography, there are plenty of indications where to go to read more deeply into the specific subject.

To conclude, this is not a book to choose if you are looking for an introduction to ancient Greece but it is certainly a helpful guide for those who have already developed a passion and an interest for this fascinating and hugely influential civilization. A thoroughly recommended addition to any bookshelf already weighed down with older and more traditional works on ancient Greece.

The second phase of the Delian League’s operations begins...
Article