The Pharaoh: Life at Court and on Campaign 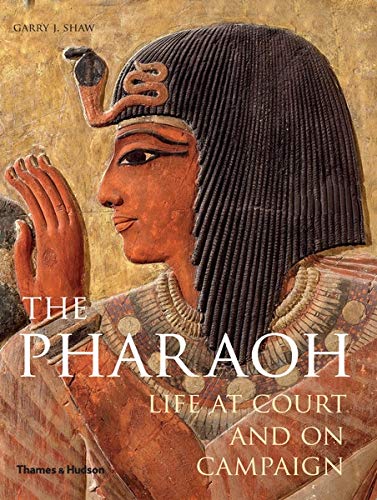 The Pharaoh: Life at Court and on Campaign is the latest publication from the British Egyptologist, Dr. Garry J. Shaw (2012). Shaw is a writer and editor for the magazine, Al-Rawi: Egypt's Heritage Review, and is an instructor at the Egypt Exploration Society, London. Shaw's new book examines the multifarious roles that the ancient Egyptian pharaoh played across time and space. Absorbing, highly entertaining, and filled with fascinating insights and intriguing facts about everything from the royal wardrobe to the religious rituals, The Pharaoh dissolves the ancient public persona, revealing something intimate and yet still accessible.

In eight chapters, Shaw outlines the Pharaoh's experience; from birth until death, the pharaoh was upheld as a warrior, priest, statesman, and judge. Beginning with an evaluation of the evolution and ideology of ancient Egyptian kingship during the Naqada Period (c. 4400–3000 BCE), Shaw presents a series of well-written chapters touching upon the importance of royal ceremony, the daily life and activities of a pharaoh, religious and military obligations, and the pharaonic imprint on royal cities like Thebes, Memphis, and Pi-Ramesses. The authoritative narration of facts and figures is brought to life with 234 illustrations--172 in color--in addition to quotations from lively, contemporary sources.

Shaw excels in detailing the "human" element. Boxed features with titles like "Pharaonic Pets" and "The Royal Titulary," bring unique subject matter to the fore without disrupting the flow of narrative. Although the Egyptian vision of kingship was complex and certainly nuanced, the reader is never lost nor distracted.

The Pharaoh also contains helpful annexes: succinct biographies of the most important pharaohs; a further reading list of primary and secondary source documents; a listing of quotations from ancient sources; and a complete listing of illustrations. Covering almost 5,000 years of history in only 224 pages, Shaw’s work is simultaneously immense and brief. It will, however, not leave you disappointed.

Published by Thames & Hudson in the United Kingdom and W.W. Norton in the USA and Canada.

The Art of the Amarna Period

Of all the pharaohs who ruled ancient Egypt, there is one in particular...
Article

The popular view of life in ancient Egypt is often that it was...
Article

The Statuary of Maatkare Hatshepsut

One of the most fascinating aspects of the female pharaoh Maatkare...

Wiener, J. B. (2013, February 13). The Pharaoh: Life at Court and on Campaign. Ancient History Encyclopedia. Retrieved from https://www.ancient.eu/review/28/

$8.98
plus shipping
View on Amazon