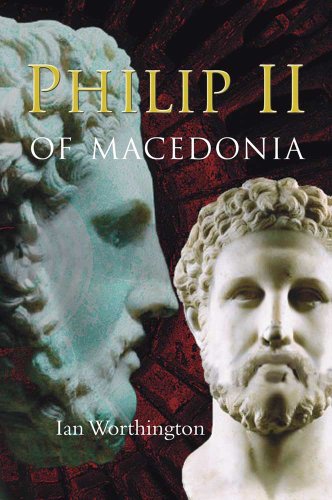 Philip II of Macedonia, by Ian Worthington, is a biography of Philip II, king of ancient Macedon from 360 to 336 BCE. Philip’s story is that of a brilliant leader, who turned Macedon into a regional superpower, paving the way for his son, Alexander Great, and his subsequent conquest of the Persian Empire. Written in a simple and accessible style, Worthington outlines a compelling picture of the life and legacy of the Macedonian ruler.

Philip II of Macedonia, by Ian Worthington, is a biography of Philip II, king of ancient Macedon from 360 to 336 BCE and father of Alexander the Great. Even though the figure of Philip is often obscured by the glory of his son, the book highlights his great achievements, both from a geopolitical and a military standpoint, which paved the way for Alexander's subsequent conquest of the Persian Achaemenid Empire.

The author is a Professor of Ancient History at Macquarie University in Sidney, where he has been teaching since 2017 CE and has a long career both in academia and in the field of historical divulgation. Specialized in Greek history, he has published hundreds of articles and numerous essays focusing mainly on the Hellenistic period, on the oratories of the 4th century BCE, and the figure of Alexander the Great.

Using a simple writing style and often mentioning ancient sources, Worthington outlines a complete and compelling picture of the life and legacy of the Macedonian ruler. He starts by painting a picture of ancient Macedon, describing the geographical position of the kingdom and the social customs of its people so that the reader can understand the background of Philip. He then tells the story of Philip himself, underlining his complicated political, economic, and strategic relationship with the Greek city-states and other foreign powers, such as Illyria, Paeonia, and Thrace.

Worthington's book is one of Philip's most complete biographies.

The third son of King Amyntas III, Philip inherited a kingdom on the brink of the abyss, threatened in its territorial integrity and torn by civil conflict. In just over 24 years of government, thanks to his incredible diplomatic and military skills, he managed to overturn the situation and to project Macedon into the role of a regional superpower, planning the invasion of Asia.

The life of Philip ends in tragedy: in 336 BCE, when the Macedonian king was at the peak of his power, he was brutally assassinated by a bodyguard while attending the wedding of his daughter Cleopatra. Worthington investigates the mystery of the king’s murder, mentioning the motives and questioning the possible involvement of Alexander and his mother Olympias, Philip’s wife. The final chapters of the book examine the aftermath of Philip’s assassination and the important heritage of the king, comparing his figure with that of his glamorous son.

Also interesting are the six appendices at the end of the book, which are focused on other important topics related to the figure of Philip, such as the archaeological discovery of his tomb at Vergina (northern Greece) and the description of the most important Macedonian kings that preceded him on the throne.

The obvious idea that emerges at the end of the reading is that the achievements that made Alexander “Great” could never have been conceived and realized without the magnificent political and military skills of Philip. In general, Worthington's book is one of Philip's most complete biographies, and this also is proved by the abundant bibliography mentioned at the end of the volume. It could help a large audience to deepen the knowledge on an extraordinary historical character, to be considered, by every standard, one of the most capable leaders of the ancient world.

$19.97
plus shipping
By purchasing books through this website, you support our non-profit organization. World History Encyclopedia receives a small commission for each book sold through our affiliate partners.

No military commander in history has ever won a battle by himself...
Article

The Royal Macedonian Tombs at Vergina

Excavations at Vergina in northern Greece in the late 1970s CE...
Article

Warrior Women of the World of Ancient Macedon

The 8th November is celebrated as Archangels Day in Greece, but...

$19.97
plus shipping
By purchasing books through this website, you support our non-profit organization. World History Encyclopedia receives a small commission for each book sold through our affiliate partners.
Remove Ads