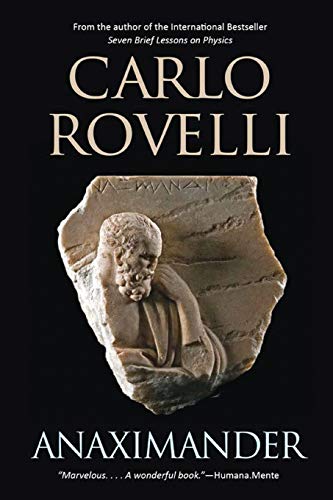 Aimed at a general audience, the book discusses the legacy of Anaximander (c. 610 – c. 546 BCE) and how his method and theories are relevant to the development of science and scientific inquiry.

Carlo Rovelli is first and foremost a scientist, an Italian theoretical physicist, who came to worldwide attention with his book, Seven Brief Lessons on Physics (2015 CE). Anaximander (first published in English in 2011 CE) is an earlier book that examines the legacy of Anaximander (c. 610 – c. 546 BCE). Carlo Rovelli's books are written originally in his native Italian, but the elegance of his ideas and writing are not lost in translation or diminished.

Our knowledge of Anaximander is not vast, indeed we have a single fragment of his work and various later references to Anaximander that enables an understanding of his ideas and thoughts. The written fragment is from Theophrastos' Physic Opinion and is believed to have quoted Anaximander's own words.

The book begins with a description of Greece in the 6th century BCE, contextualising the 6th century BCE with the past, and then discusses Anaximander's theories and discoveries. 6th-century BCE Miletus was a place of pioneering thinking, Thales, Anaximander, Anaximenes, Hecataeus were all part of the Ionian school of Greek philosophy centred there. Anaximander examined the ideas of his tutor Thales of Miletus and then put forward his own ideas, crucially in written form and suggesting at the same time that the ideas of Thales were not altogether correct. Thus the process of scientific inquiry had begun, indeed “a conceptual revolution” was underway.

Anaximander's ideas are important because essentially his theories were correct. Anaximander's explanations such as the cyclical nature of water are based on “natural things, without reference to the divine”. This, of course, was a departure from cultural norms of that era that saw the gods as involved in the creation myths and legends as well as impacting daily lives.

The reader will be taken on a journey from Anaximander's era to Einstein & beyond, with Anaximander always in mind.

Rovelli discusses the social, cultural, and political implications of the train of thought that Anaximander had set in motion in ancient Greece and the centuries that followed, going beyond the ancient world to the relevance of the scientific method to the modern day. Underlying Rovelli's writing is progressive thinking and an understanding that scientific truth is discovered by trial and error, a viewpoint that being wrong is not necessarily a bad thing if it advances the truth by examination and critical thought.

Rovelli discusses the ideas and the legacy of Anaximander affectionately, recognising and celebrating Anaximander's contribution to science. Interestingly, the author's latest book The Order of Time (2017 CE) is titled from the one existing fragment of Anaximander's written record.

Anaximander is difficult to categorise as it is both an ancient history book and also a book that examines the principles of scientific thought. In many ways it is a book for the 21st century CE but with its roots in the 6th century BCE, expanding to cover the advances that have been made since.

In my opinion, Anaximander is a wonderful book that should appeal to the ancient historian and also to those interested in science. The reader will find that they are taken on a journey from Anaximander's era to Einstein and beyond, with Anaximander always in mind. It achieves its objective of examining Anaximander's contribution to science and celebrates his legacy, placing his legacy squarely and relevantly in the modern world. The ancient historian might find the book too concerned with science, that, however, would be a disservice to Anaximander and his achievement.

$17.75
plus shipping
$21.12
free shipping worldwide
By purchasing books through this website, you support our non-profit organization. World History Encyclopedia receives a small commission for each book sold through our affiliate partners.

Kathleen Freeman was a writer who paid close attention to detail...
Article

$17.75
plus shipping
$21.12
free shipping worldwide
By purchasing books through this website, you support our non-profit organization. World History Encyclopedia receives a small commission for each book sold through our affiliate partners.
Remove Ads