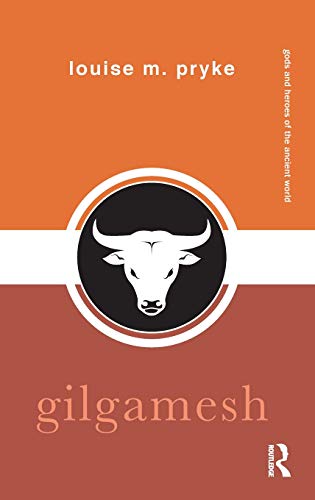 The Epic of Gilgamesh is perhaps the most well-known literature on account of its ancient pedigree and universal themes. Though an extensively analyzed epic, conversations by informed scholars are difficult for the general public to access due to technical languages within articles or paywalls. Gilgamesh, part of the series Gods and Heroes of the Ancient World, is an attempt to remedy the problem. Author Louise M. Pryke is a Lecturer for the Languages and Literature of Ancient Israel at Macquarie University. She previously published Ishtar, which aims to provide accessible analysis of the mythology about the deity Ishtar.

From the outset, Pryke establishes that the primary aim of the volume is to examine the literary character of Gilgamesh through written and visual evidence. Her discussion is organized into seven chapters, each focusing on different aspects of Gilgamesh’s character: kingship, Gilgamesh as warrior and hero, animality and ecology, love and family, wisdom and civilization, death, and reception and influence. Though drawing extensively from the Old Babylonian version of The Epic of Gilgamesh, she also includes other relevant Sumerian literature: Gilgamesh and Humbaba; Gilgamesh and Akka; The Death of Gilgamesh; Gilgamesh, Enkidu, and the Netherworld; and Gilgamesh and the Bull of Heaven. An appendix briefly discusses other resources for individuals seeking more details on any of the themes.

Viewing Gilgamesh from seven perspectives & themes provides a window for readers to consider the complexity of his literary representation.

Overall, Pryke provides a thorough, even if sometimes repetitive, discussion about how Gilgamesh is characterized within the epic and other literature. Viewing Gilgamesh from seven perspectives and themes provides a window for readers to consider the complexity of his literary representation. Most notably, the final chapter on the reception and influence of Gilgamesh enables readers to see a multitude of ways in which Gilgamesh’s literary figure has been absorbed into modern societies and cultures.

Unfortunately, the volume does not meet its goal of providing accessible analysis about Gilgamesh. Throughout Gilgamesh, Pryke primarily writes in an academic tone, making it difficult for non-specialist audiences to understand and retain the content. At one point, she leaves a German quote untranslated (131). Moreover, it is sometimes unclear how the data and discussions within each chapter are structured. So, following the logic and flow of the book is sometimes challenging. This may be in part due to the unsteady object of analysis. That is, whereas the introduction frames the volume as primarily discussing the literary character of Gilgamesh, each chapter typically includes extensive discussions about other characters within the Epic of Gilgamesh. Though it is not improper to discuss other characters, too often it detracts from the central aim of the book, namely, to unpack Gilgamesh.

At base, I enjoyed reading Gilgamesh, even with the criticisms. It is not for a general audience, though. For folks with previous knowledge of the epic and the ability to read technical language, Gilgamesh is a good starting place for a general overview of major themes and current research. For folks who are not familiar with the Epic of Gilgamesh and who are not able to read technical language, a better option is to pick up a copy of the Epic of Gilgamesh translated and edited by Benjamin Foster.

$151.27
plus shipping
$161.22
free shipping worldwide
By purchasing books through this website, you support our non-profit organization. World History Encyclopedia receives a small commission for each book sold through our affiliate partners.

The Eternal Life of Gilgamesh

The Epic of Gilgamesh is among the most popular works of literature...
Article

Sometimes it is the smallest discoveries that have the largest...
Article

The Newly Discovered Tablet II of the Epic of Gilgamesh

Surpassing all other kings, heroic in stature,     &nbsp...

$151.27
plus shipping
$161.22
free shipping worldwide
By purchasing books through this website, you support our non-profit organization. World History Encyclopedia receives a small commission for each book sold through our affiliate partners.
Remove Ads