A Cabinet of Byzantine Curiosities: Strange Tales and Surprising Facts from History's Most Orthodox Empire

by Michael Goodyear
published on 06 May 2019
Send to Google Classroom:
Rating: 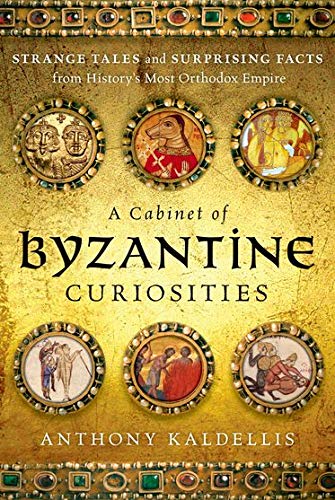 Kaldellis provides a collection of hundreds of one to five sentence long interesting short stories from Byzantine history, including ones on corrupt monks, eunuchs, and Greek fire. The length makes it a highly approachable read, although a basic understanding of Byzantine history would be helpful to fully understand all of the references.

In this book, prolific professor of Byzantine studies Anthony Kaldellis provides a collection of enlightening vignettes about life in the Byzantine Empire. Each of the hundreds of separate short stories is only a sentence to a paragraph long, providing a taste of the wider world of Byzantium from 330 to 1453 CE.

Today, Byzantium is commonly known for its religious disputes and labyrinthine politics. However, the Byzantines had a rich and multifaceted society that is much more than just this popular image. Kaldellis’ goal in A Cabinet of Byzantine Curiosities: Strange Tales and Surprising Facts from History’s Most Orthodox Empire is to expand this common understanding of Byzantine history and provide easily digestible and fun stories to demonstrate this.

The book is broken up into eighteen different sections, each focusing on a particular aspect of Byzantine life such as marriage and the family, eunuchs, inventive insults, and foreigners and stereotypes. Kaldellis mixes translated quotes and his own commentary to form the individual stories. He pulls from both well-known tales from Byzantium from famous Byzantine historians such as Prokopios and Theophylactos Simokattes as well as rather obscure texts such as lesser-known saints’ lives. In addition, Kaldellis peppers in interesting statistics about the Byzantine Empire, such as the number of civil wars and how many emperors died in battle.

This self-proclaimed “handy reservoir of tales and anecdotes” provides hundreds of interesting insights, including imperial bride shows, smuggling silkworms out of China, the popular Byzantine fish sauce known as garon (the Roman garum), conmen that pretend to be demons, and dream interpretations. These stories undoubtedly demonstrate the richness of Byzantium compared to its popular image in today’s society. Kaldellis provides a distinct impression of Byzantium as a learned and advanced civilization for its time, but also of the Byzantines being a quite religious and superstitious people, showing that there is a grain of truth in today’s popular image of them.

Despite living centuries before us, the Byzantines hated going to the dentist & grumbled when church services ran long.

Kaldellis successfully uses the occasional pop culture reference and comparison to modern society to humanize the Byzantines. Despite living centuries before us, they also hated going to the dentist and grumbled when church services ran long. The origins of Cinderella and Moby Dick may also be in Byzantine history.

However, while the book provides hundreds of amusing insights into Byzantine history, it does not provide any overview of Byzantium, making it difficult to navigate for anyone who is not at least somewhat familiar with the contours of Byzantine history. It jumps straight into the short stories about Byzantium. This makes it a useful treasure map of sources on interesting topics of Byzantine history, but more suited for scholars and history buffs than casual readers.

It should be noted that the book is not a full panoply of Byzantine stories, just a taste of some of the most interesting ones. For example, there is only one quote on Armenians in the Byzantine Empire, but Byzantine sources are full of insightful quotes on them. Furthermore, the quality of citations varies, with some statements not cited at all, making it difficult, although not impossible, to find the origin of some stories.

A Cabinet of Byzantine Curiosities, while not an introduction to Byzantine history, is a unique and entertaining showcase of some of the most interesting tales from Byzantium’s millennium-long existence. This approach makes it a quick read and a worthy addition to the bookcase of anyone interested in the Byzantine Empire.

$18.95
plus shipping
$19.55
free shipping worldwide
By purchasing books through this website, you support our non-profit organization. Ancient History Encyclopedia receives a small commission for each book sold through our affiliate partners.

The Differences Between Byzantine & Armenian Christianity

Although both the Byzantines and the Armenians were Christian...
Article

Germanic influence reigned in the Roman Empire from the end of...

Kaldellis, A. (2019, May 06). A Cabinet of Byzantine Curiosities: Strange Tales and Surprising Facts from History's Most Orthodox Empire. Ancient History Encyclopedia. Retrieved from https://www.ancient.eu/review/213/

$18.95
plus shipping
$19.55
free shipping worldwide
By purchasing books through this website, you support our non-profit organization. Ancient History Encyclopedia receives a small commission for each book sold through our affiliate partners.
Remove Ads