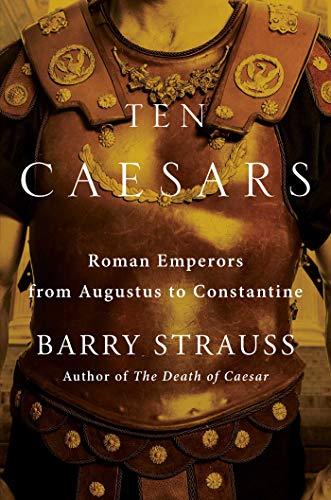 Written for a general audience, Ten Caesars is filled with vivid descriptions of historical moments and nuanced presentations of ten different emperors. Barry Strauss' engaging narrative style and focus on framing each Caesar with his historical context results in a book with a panoply of unique characters, including the Caesars, military generals, and many women.

In Ten Caesars: Roman Emperors from Augustus to Constantine, Barry Strauss tells the story of ten notable Roman leaders. Strauss is a Professor of History and Classics at Cornell University, holding an MA and PhD from Yale University. Moreover, he published many other well-received articles and books on the subject of Roman history. As such, he is highly qualified to narrate the history of ten Roman emperors.  Scholars are trained to be analytical, critical, and meticulous, and so when they write books for general audiences, they are often erudite and informative but also dry, unengaging, and monotonous. Strauss, though, is different.

From beginning to end, Strauss’ storytelling captured my attention with vivid descriptions of historical moments and nuanced presentations of the Caesars. He accomplishes these feats by carefully showing how each individual Caesar interacted with his social, political, cultural, and religious environment in unique ways. In doing so, he unveils a new character through each chapter. This is notable because historical figures too often become flattened, one-dimensional characters, one the same as another. Strauss avoids this type of characterization, writing a refreshing narrative instead.

His narrative weaves together various characters who themselves develop and serve to link distinct chapters together. For example, Plotina, the wife of Trajan, is characterized as a notable wife: “Even an ancient writer who is sometimes critical of Plotina considers her behavior throughout Trajan’s reign to have been above reproach” (157). In the next chapter about Hadrian, Strauss explores how she served as a sort of surrogate mother who herself was a student of Epicurean philosophy. Throughout two chapters, Plotina is developed and characterized as a unique individual who shaped and was shaped by Hadrian and Trajan. As such, her character is relatable.

Moreover, as a consequence of understanding the Caesars as part of their historical environments, Strauss spends a significant amount of time exploring how women played significant roles in shaping Roman history. Sometimes they influenced history directly, such as Helena, mother of Constantine, who was sent to Jerusalem in order to locate keys sites where Jesus lived and direct the building of new churches in the city, other times their influence is indirect, such as with Livia, mother of Tiberius, who, with her unusual wealth as a woman, acted behind the scenes to influence political decisions. In any case, women are clearly important to history in Ten Caesars.

I highly recommend Barry Strauss’ Ten Caesars: Roman Emperors from Augustus to Constantine. The style of writing is both informative and engaging, erudite and captivating. Though focused on individual Caesars, he artfully frames each Caeser within his respective social, political, familial, and religious world, permitting him to narrate a story with a panoply of three-dimensional characters and events. As someone who does not specialize in Roman history, my only hesitation about the book is the degree to which the narrative constructed by Strauss fits within the critical historical scholarship. That caveat aside, Ten Caesars is an excellent addition for individuals or libraries seeking books with an engaging and informative history. Likewise, the various chapters could be helpful course content aimed at teaching students how to read secondary sources.

$19.15
plus shipping
$24.33
free shipping worldwide
By purchasing books through this website, you support our non-profit organization. Ancient History Encyclopedia receives a small commission for each book sold through our affiliate partners.

Rome under the Julio-Claudian Dynasty

The Julio-Claudians were the first dynasty to rule the Roman...

$19.15
plus shipping
$24.33
free shipping worldwide
By purchasing books through this website, you support our non-profit organization. Ancient History Encyclopedia receives a small commission for each book sold through our affiliate partners.
Remove Ads