Among Women: From the Homosocial to the Homoerotic in the Ancient World 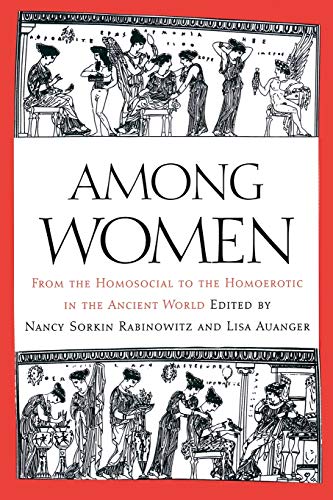 Among Women edited by Dr. Nancy Sorkin Rabinowitz and Dr. Lisa Auanger was one of the first comprehensive studies on the relationships between women in the ancient world. The depth of this book’s essays and breadth of its subject matter make it highly recommendable to both Classicists and readers with a more general interest in social history. 17 years after its original publication, this book continues to be essential reading on women’s social and sexual lives in the ancient Mediterranean.

Nancy Sorkin Rabinowitz opens the book with an introduction that addresses the difficulty inherent in constructing our notions of ancient societies based on scanty evidence and modern preconceptions. Rabinowitz's introduction summarises the various viewpoints and methodologies which dominate the discussion of sexuality and gender history, including fields as disparate as Classics, feminist theory, and LGBT studies. Rabinowitz’s even-handed and rigorous approach to the various intersecting fields is necessary to ground readers in the methodology and historiography which frames the following essays.

Ten essays from different authors combine archaeology, literary analysis, and art history to unearth ancient notions of how women lived and loved. The essays range in time and place from Minoan Greece to 5th-century CE Egypt, making this volume far more expansive in terms of its definition of antiquity than many similar anthologies. The subject matter is as engaging as it is diverse, and as a whole, the authors do an excellent job of working with many different types of evidence.

Among Women’s contributors examine material spanning from Roman mythology to Bronze Age frescoes and Late Antique letters. While some essays stand out as stronger than others, each entry makes a meaningful contribution to the whole. The book makes the most of each essay’s evidence by presenting readers with a variety of supporting photographs and illustrations.

Perhaps the book’s greatest fault is that it leaves readers searching for more. Among Women does not attempt to create a comprehensive picture of women's interpersonal relationships across Graeco-Roman antiquity. Instead, it presents readers with analyses of the sadly incomplete corpus of surviving evidence. As wide-reaching as its subject matter is, the book provides readers with little more than snapshots of very complex cultures which are in some ways still poorly understood.

Overall, the scholarly value of this book makes it a welcome addition to the ancient historian’s bookshelf, and a worthwhile introduction to a woefully understudied facet of history.

$39.95
plus shipping
$39.95
free shipping worldwide
By purchasing books through this website, you support our non-profit organization. World History Encyclopedia receives a small commission for each book sold through our affiliate partners.

King, A. (2019, January 11). Among Women: From the Homosocial to the Homoerotic in the Ancient World. World History Encyclopedia. Retrieved from https://www.ancient.eu/review/200/among-women-from-the-homosocial-to-the-homoerotic/

King, Arienne. "Among Women: From the Homosocial to the Homoerotic in the Ancient World." World History Encyclopedia. Last modified January 11, 2019. https://www.ancient.eu/review/200/among-women-from-the-homosocial-to-the-homoerotic/.

$39.95
plus shipping
$39.95
free shipping worldwide
By purchasing books through this website, you support our non-profit organization. World History Encyclopedia receives a small commission for each book sold through our affiliate partners.
Remove Ads