Byzantium: The Surprising Life of a Medieval Empire 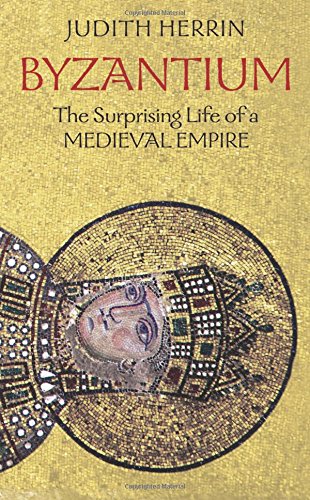 This excellent and highly readable book by Judith Herrin breezes through some of the more fascinating aspects of the Byzantine Empire and provides insights rarely found in other works such as intriguing court eunuchs, influential women, and clothing fashions.

The history of the Byzantine Empire covers a timeframe of over a millennium, and this fact alone has caused all kinds of headaches for authors, chief amongst them the dilemma of what to leave in and out of their books. The majority of writers on Byzantium seem to settle for a chronological treatment focussing on the emperors and their three main policy areas of domestic affairs, squabbles with the church, and imperial conquest and defence. This is all well and good, and perfectly understandable, as that is what we have the most information on, too, but it hardly makes for a pleasurable reading experience to plough systematically through the reigns of 88 emperors and endless wars with the Bulgars and Arabs.

Judith Herrin’s book is, in contrast to just about every other book on this topic, a breath of fresh air as the current Professor of Late Antiquity and Byzantine Studies at King’s College London adopts a quite different approach. There is still a general progression through the centuries but Byzantium also takes a few detours, offers some sideways insights, and leaves the reader with a much clearer picture of what it was actually like to live in one of history’s greatest ever empires compared to other books with triple the word count.

Resisting the temptation to tell us the entire history of Byzantium in as short a space as possible, Herrin opts for a more leisurely pace through history with some in-depth coverage of topics that other books simply do not have space for. What is more, the topics this book examines are exactly the ones the general reader would probably most like to know about: society, the role of women, the Hagia Sophia, Byzantine art and icons, laws, trade and commerce, and the workings of the Byzantine court at Constantinople.

The text is easy to follow, is blissfully free from the endless footnotes and references that clutter up so many works by learned historians who are tasked with presenting to a general audience, and is full of tidbits, insights, and even the odd bit of humour, which combine to give the overall impression the author knows all there is to know but has selected only the best parts for your attention.

Byzantium is divided into four main parts: foundations, transition from the ancient world, medieval Byzantium, and the decline of the empire. Aside from the usual chapters one would expect to find such as Constantine’s move from Rome, the defence of the empire against the Arab Caliphates, and the siege of 1453 CE, there are many other more unusual ones covering the Ravenna mosaics, literacy and education, the eunuchs of the imperial court, and the authoress and historian Anna Komnene amongst others. Most of these topics barely merit a page or two in other books on Byzantium never mind a chapter.

In summary, as an introduction to Byzantium there is no better place to start than this book. Students having to write essays on the Byzantine empire might need a fuller and more chronological coverage of the history, but for many topics, Byzantium would still prove useful for the unusual insights it gives into the people and culture of the time. General history enthusiasts will be delighted with the book if they are looking for a highly readable text that distils all that is interesting and unique about the Byzantines. In this edition, there are 41 photographs in colour or black and white, six maps, a short further reading list for each chapter, a five-page chronology, and a good index.

$17.57
plus shipping
By purchasing books through this website, you support our non-profit organization. Ancient History Encyclopedia receives a small commission for each book sold through our affiliate partners.

Society in the Byzantine Empire

The society in the Byzantine Empire (4th-15th century CE) was dominated...
Article

Germanic influence reigned in the Roman Empire from the end of...

$17.57
plus shipping
By purchasing books through this website, you support our non-profit organization. Ancient History Encyclopedia receives a small commission for each book sold through our affiliate partners.
Remove Ads