Uncovering the Culture of Ancient Egypt 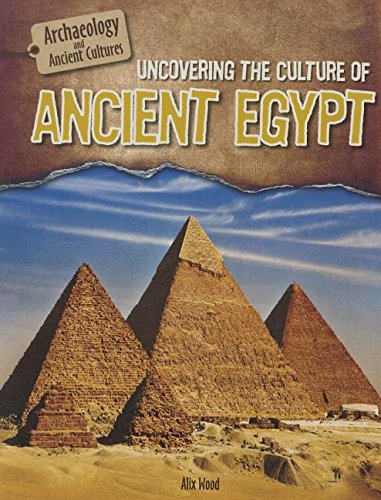 Uncovering the Culture of Ancient Egypt by Alix Wood is a part of the Archaeology and Ancient Cultures series. It is designed for younger children aiming to pique their interest in and educate them about ancient cultures. The book is laid out with a 2-page spread that details a city, people, or topic in ancient Egyptian history including the Pyramids of Giza, pharaohs, temples, etc. It provides a short description of the topic with pictures of artifacts, ruins, art, and people of the times.

Uncovering the Culture of Ancient Egypt by Alix Wood is a part of the Archaeology and Ancient Cultures series. It is designed for younger, elementary school-aged children aiming to pique their interest in and educate them about ancient cultures.

This book concentrates on ancient Egypt’s people and wonders. Almost everyone is aware of the famous Pyramids of Giza, but fewer are familiar with Herakleopolis and the Karnak Temple and the incredible constructions within those sites. This book takes you on a tour of all three! It also takes you on a brief tour of the worker’s lives in their attempt to build monuments that would last through the ages, through Queen Hatshepsut’s reign, and through nearly-lost cities. In addition, it provides the story of the Rosetta Stone and how we came to understand many of the hieroglyphs in ancient Egypt. Within each section, it provides images of the monuments, people, and artifacts that it mentions. These images help take the reader to ancient Egypt and help visualize what is being shown in the text. Additionally, each page contains a map of Egypt showing where the current topics being mentioned are located. At the beginning of the book is a map showing Egypt’s place in the world. Within the text are words in bold that link to a glossary at the back of the book in order to help young readers learn new words they may be unfamiliar with. It also contains a short section that lists a few books and a website that one can go to if they are interested in learning more about the topic.

As stated in the series title, this book focuses on the archaeology and culture of ancient Egypt. In accordance with the other titles, this book does a nice job of showing and explaining many examples of artifacts found in ancient Egypt. What it does lack though, is an explanation of archaeology itself. It lacks an explanation of how digs work and how artifacts are identified. This book would be greatly enhanced if it explained just how archaeological discoveries are made.

This book does a bit better job of explaining the culture of ancient Egypt than the other books in the series. The connection between one age of Egypt to another is still lacking, but more context is given to each age of Egyptian history compared to what was given in the Mesopotamia or Greece titles in this series. Different hieroglyphs are shown corresponding to the stages of writing in Egyptian culture. However, there is a page in the book that shows hieroglyphs they claim resembles helicopters, submarines, spaceships, and gliders. The motivation for including them was likely innocent, as children would be intrigued by this, however, the acknowledging of conspiracy theories in a book for children who might not be able to distinguish fact from fiction so easily is disappointing.

Despite the few problems mentioned above, the book contains many colorful, interesting pictures of Egyptian artifacts. The images in the book are first-rate, although they could use a bit more of a description than what is generally given.  It does contain just enough to be useful in learning about Egypt, though it would not make for a great stand-alone text, unless the reader struggled with large amounts of information at once. This book is effective in its picture-to-text ratio. It would be a beneficial tool for a child who struggled with reading large amounts of information at a single time. It is designed to keep the interest of a young child and teach them some interesting facts in a short space. It catches many of the most interesting aspects of Egyptian monuments and artifacts, providing a decent introduction to ancient Egyptian archaeology and cultures.

It is not a great foundational book for children, leaving much to be desired concerning the history and culture. However, this book is fairly well-done overall and would be a decent supplementary resource for elementary school-aged children.