Battling the Gods: Atheism in the Ancient World 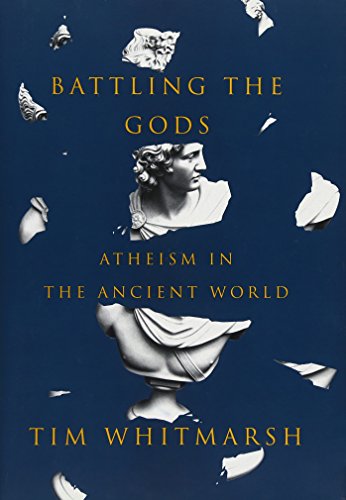 Was atheism a product of enlightenment philosophy? Tim Whitmarsh argues it is not. The classicist focusing on Ancient Greece and Rome argues that though evidence is scant in places, there is more than enough leads for historians to ascertain whether atheism has been prevalent since antiquity. Under the tutelage of Tim Whitmarsh, the reader has an eye-opening journey through the dense academic substance, translated into manageable chunks for ease of access, preparing them for further journeys.

Ever since the beginning of time people all over the world have worshipped something more than themselves. Ancient history is peppered with temples, mausoleums, maraes, and pyramids that pronounce the presence of the dominant gods to the world. But has everyone, everywhere, always believed in a god? Tim Whitmarsh; a classicist of the Mediterranean, focuses on the areas of Ancient Greece and Rome, with their shared pantheons, shared experiences, and shared transitions from religion to religion.

The book has a slow build of a narrative. Whitmarsh acknowledges there is limited evidence describing atheism within antiquity, though he does use what pointers are available with cogent efficiency. The author points out that tablets and court proceedings can still be found, as well as texts in the way of Plato, and the result of the trial of Socrates that can be extremely enlightening when the reader considers the evidence described surrounding it.

Whitmarsh demonstrates his argument well; that not only were there many atheists in the ancient world but also that it is a safe assumption based on the evidence that persecution of atheism was not prevalent. Often there is an argument that Christians were persecuted by the Romans, however, Whitmarsh explains that it was not an institutionalized policy except under one emperor (Diocletian, 285-305) and that religious tolerance was, in fact, the watchword in the classical period. No one religion was persecuted more than any other. Atheists were no more under threat than Christians or any other cultists in the era of polytheism.

A picture begins to develop throughout the book that it is not a belief in one pantheon that was significant in the classical Mediterranean, but the belief in something bigger than yourself. Believers and non-believers could coexist with ease, so long as the non-believer did not present themselves as more than the gods. Respect gods and you may be godless. It is arrogance that is persecuted, in the same way, it was religious infidelity that was banned in the Byzantine empire, and to a lesser extent, medieval Islam.

The saga of Socrates (c. 470-399 BCE) is the focus of Whitmarsh’s appraisal of philosophical warfare. There are pre-Socratic, and post-Socratic philosophers. Whitmarsh follows the evidence and proposes that it is Socrates’ humanist leanings and his conviction in his teachings that ultimately led to his trial and death in Athens. This highlights the continuing change in the philosophy of religion, and though not a policy in the state arena, atheism became the topic of conversation in the lifetime of Socrates and after his death, when Plato (c. 428- c. 348 BCE) establishes his pro-religion rhetoric and makes an ardent argument against atheism.

Plato, according to Whitmarsh, offers the reader a window into the mind of someone who is grappling with religion, writing, and notoriety. He changes his position many times in his writing. At times he seems to support Socrates’ philosophy, though he eventually sides with religion as the proper way to live a meaningful life.

Whitmarsh’s book is really designed to help the curious reader read between the lines. Everything is present on the face of the narrative, enough for a reader to go through the book without missing a beat and enjoying the story as they would any other. Whitmarsh has another agenda though, which is to demonstrate that although we think of atheism as a modern phenomenon, picking up the pace during and after the Enlightenment (1700's CE), it is actually a much older form of being, dating at least back into antiquity and by extension, into the earliest parts of human history. So, the question that has to be answered is; how did religious intolerance become the predominant force that led the western world through the medieval era and the Renaissance until institutionalized atheism began to rear its head in the Enlightenment during the 1700's CE?

Whitmarsh shows that Atheism was simply considered one of many acceptable states of being for much of antiquity.

Whitmarsh explains this in the last parts of his book. This is the most important message in his book and it relates to Constantine the Great (c. 272 – 337 CE). Constantine, to cement his dynasty and protect the Roman empire from the collapse it was experiencing in the west, decided to move his capital to Constantinople (modern Istanbul). Another edict he issued in his reign was an order making the Christian religion, which he converted to, the official and singular religion of the Eastern Roman Empire, which later became the Byzantine Empire. Whitmarsh explains that this is the first time that a religion has become institutionalized in the sense that it is the only religion that is recognized by the Byzantines as legitimate. Importantly, even with this policy, practitioners of other religions were tolerated and allowed to continue in their religion. There was no state-mandated persecution.

In this way, Whitmarsh illuminates Christianity brilliantly. It began as a cult, a small section of the Mediterranean in antiquity that clung on, long enough to be chosen as an innocuous state religion that would not cause too much trouble.

In this way, the book culminates with Christianity becoming the only true religion. Whitmarsh concludes his argument on an important point, during the reign of Theodosius I, when the Nicene council is called to decide what mode of Christianity would become the orthodoxy of the Byzantine empire. Because of the council, Theodosius established the state religion in the Nicean vein, outlawing religion practiced under any other doctrine.

So, we have a picture presented by Whitmarsh that shows that the modern view that religion as the default norm is misleading, Whitmarsh shows that Atheism was simply considered one of many acceptable states of being for much of antiquity. The development towards religious monocracy in Hellenistic antiquity was drawn out by philosophers and the need for the Byzantine state to consolidate its position in the Mediterranean. It is also clear that just because a religion is given official rights in the state, it does not mean other religions need be subjected to religious intolerance.

There is an undertone to this book which might suggest that atheism is in danger in the modern world of becoming the intolerant orthodoxy that Christianity eventually became in Theodosian Constantinople. It is a potent reminder that intolerance comes in all shapes, and if a belief system becomes entwined with the state then there is a risk that people of other creeds will become oppressed in some way. Whitmarsh suggests in his writing that atheism is a belief system in much the same way as many religions found all over the world.

Whitmarsh set out to inform the reader that Atheism is an older and more resilient state of being than we are led to believe in the 21st century CE. The reader is left with the funny feeling that all the proffered truths that are available in the modern era may only be truths if history is ignored or manipulated. If there is no social media, no documentation, or surviving testimony, then is it truly possible to understand how prevalent such a phenomenon as atheism was in antiquity? Is our current Atheistic awakening as special as proponents would like to believe? The Author of Battling the Gods argues it is not.

$13.98
plus shipping
$23.37
free shipping worldwide
By purchasing books through this website, you support our non-profit organization. Ancient History Encyclopedia receives a small commission for each book sold through our affiliate partners.

The gods and goddesses of Ancient Egypt were an integral part of...

The Mayan Pantheon: The Many Gods of the Maya

The pantheon of the Maya is a vast collection of deities who were...

$13.98
plus shipping
$23.37
free shipping worldwide
By purchasing books through this website, you support our non-profit organization. Ancient History Encyclopedia receives a small commission for each book sold through our affiliate partners.