Uncovering the Culture of Ancient Britain

This book is a perfect introduction for children to the archaeological sites in Britain, so they can learn about the main cultures living in Ancient Britain while they enjoy reading and learn new words and concepts. 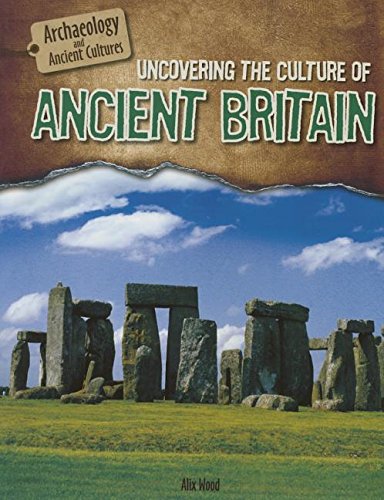 Uncovering the culture of Ancient Britain is a book published by Alix Wood Books and it is part of a series about ancient Britain, Egypt, Greece, India, Mesopotamia and Peru. The main purpose of this series is creating an interest in children for the ancient cultures that lived before us and influenced modern culture.

As the title indicates, this volume focuses specifically on ancient Britain and its main ancient monuments such as the footprints in Happisburgh (Norfolk), Skara Brae (in the Orkney Islands), the Giant’s Ring (Northern Ireland), the Avebury Circle (Wiltshire), Stonehenge (Wiltshire), Seahenge (Holme Beach), Mousa Broch (Shetland Isles), the chain and other treasures found in the RAF Valley, Old Sarum (Salisbury), Chysauster (Cornwall), Hadrian’s Wall (from the River Tyne to the Irish Sea) and the Roman baths in Bath. For each monument, the book includes two pages with maps (so children can see where in Britain the monument is), a description of the place - of course - with photos and even some diagrams of the inner structure of the monument. Also included are a photo and a small description of an ancient object that was found at the archaeological site. Since the book is intended for children, some words are in bold; their meaning can be looked up in the glossary added at the end.

This book is recommended for children up to twelve years old, although it really depends on the reading skills of each child. Uncovering the culture of Ancient Britain is a great way for children to learn about archaeology without getting too tired and without having to read definitions that are way too complicated for their age. Also, as some words are specific archaeological terms, they will learn new vocabulary that would be difficult to acquire in other contexts. In conclusion, this book is perfect when it comes to getting our children interested in archaeology and history outside of school, and it could maybe even pave the way for a new generation of archaeologists.

The Literary Development of the Arthurian Legend

The Arthurian legend begins with the Welsh cleric Geoffrey of Monmouth...
Article