This book covers the 50 most important achievements of the ancient Greek civilization and is a great travel companion for anyone visiting this historic country. 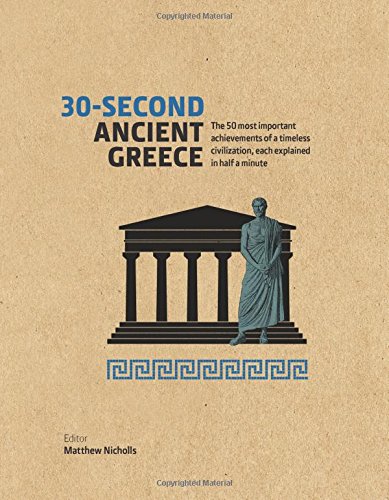 The 30-Second Guide to Ancient Greece serves well as an introduction to one of the worlds most fascinating ancient cultures as well as a travel guide for those seeking a trip of a lifetime to Greece.

Matthew Nicholls and his fellow contributors organize the book into seven logical sections: The Greek World, People & Society, Myth & Religion, Literature, Language & Learning, Architecture & Buildings, and The Arts. Once finished, the reader is left with an appreciation of Ancient Greece that, while not deep, is entertainingly broad.

Intertwined among the sections, Nicholls introduces profiles of famous ancient Greeks and even one god. While the usual gallery is present (Alexander, Zeus, Archimedes), we are also introduced to lesser known figures such a Phidias and Sappho -- the latter being a musician who was more popular than Sinatra, Tom Jones and Madonna combined!

This book accompanied me on a recent trip to Greece and was useful as I endeavored to appreciate the broader concepts at play within the ruins I visited. 30-Second "blurbs" on "The Polis," "Law," "Medicine," and other concepts helped bring life to the old ruins.

Beautifully illustrated, 30-Second Ancient Greece, is a book to be shared widely, and perhaps accidentaly left in a place where a teenager would normally surf a smartphone when the wireless "accidently" goes down.

Colonel (Retired) Paul B. Olsen
Retired Army Colonel with 27 Years of Service in the U.S. Army with deployments throughout the Middle East and Europe. Currently Directs Programs and Partnerships for Old Dominion University.

The prosperity of the majority of Greek city-states was based on...
Article

Trade was a fundamental aspect of the ancient Greek world and following...
Article

Women in the ancient Greek world had few rights in comparison to...