"Men of Bronze" goes into the depths of hoplite warfare in Ancient Greece by examining every aspect of the Hoplite from its beginnings to how the hoplite fought on the battlefield and everything in between. It essentially compiles the leading viewpoints on each of these subjects in an effort to offer the reader each of these ideas equally. I would highly recommend this book to any reader looking for a challenge and the opportunity to hear from the world's leading scholars on hoplite warfare. 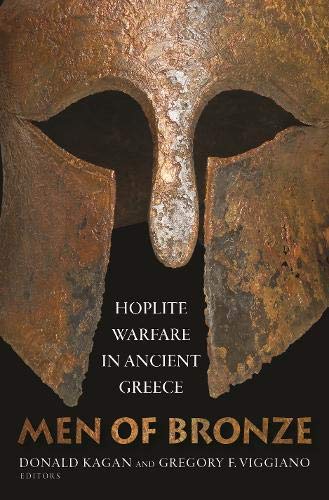 Many times when a reader picks up a book pertaining to a certain event or object in history, it is from one point of view that has either been influenced or created from other ideas to form one concise thought. It is only in other books from different authors does the reader get multiple opinions on that subject and even then, the books can suffer from different levels of expertise from the authors, causing the different points of view to be substantially unequal. However, in the book "Men of Bronze" the reader is able to resolve this issue of narrow writing as it attempts to compile a large number of opinions on the subject of hoplite warfare in ancient Greece. The subject itself is thought to be very linear as many believe (including myself before I read the book) in the simplicity of how the greek hoplite was created and inevitably evolved. "Men of Bronze" creates a narrative that matches no other as it attempts to educate the reader on every aspect of the hoplite and the different viewpoints of each subject by compiling the world's leading ideas of hoplite warfare in Ancient Greece.

The book originated from a conference back in April 2008 where leading hoplite scholars from throughout the world came to join and discuss the characteristics and evolution of the hoplite at Yale University. This book attempts to compile all of the scholars' works into one concise volume in the hope that the reader may be able to learn not only about the hoplite but the surrounding theories for each of the soldier's aspects. The book is laid out in a way that does not confuse the reader as it bounces from topic to topic but makes sure to explicitly say when subjects move from one scholarly paper to the next. Overall the book spans 12 chapters (not including the preface and introduction) and 245 pages - though the chapters go by fast as each one is a completely new subject regarding the ancient hoplite and, considering each of these subjects has been argued for decades, it is not a bad read. In addition, each viewpoint and chapter are perfectly supplemented with diagrams, pictures and sketches of artifacts making the subjects discussed in the book extremely easy to visualize (it is a treat for visual learners like myself, who love it when authors include images that go hand in hand with the subject matter). Overall, the layout and construction of the book are extremely smooth and it would be difficult for the reader to be confused as they progress through it.

When it comes to the content of the book, it contains extremely well-communicated and quality content - though I found that it is very dense. This book is a compilation of scholarly essays that use a large number of sources to communicate a certain viewpoint in the hope of swaying other scholars to their point of view regarding hoplites. I found myself rereading sentences and even paragraphs to make sure I had understood what was trying to be communicated properly. The content is incredible as it goes into extreme depth of what a hoplite was, how they fought, how they emerged, etc. However, the scholars communicate these ideas in a way that a reader who is not familiar with scholarly writing may find more difficult to follow. Though I would not let this fact put off any possible readers from buying this book as it is incredible.

In conclusion, "Men of Bronze" is a fantastic book that threw me off guard on how in-depth it went into the origins and evolution of hoplite warfare. This book achieves its goal of compiling the modern day arguments of every major (and many minor) aspects of the greek hoplite as well as educating the reader in the opinions of the world's leading scholars on the subject. Overall, I would recommend this book to any reader looking for a challenge and who is eager to learn about society and warfare in ancient Greece.

Caleb Curry
I am an aspiring historian and reenactor with a true passion for history. Since I was a small child Ancient History intrigued me, making me a constant and steady researcher of the ancients. I never back down from learning: I accept it with open arms.

No military commander in history has ever won a battle by himself...
Article

One of the most effective and enduring military formations in ancient...
Article

In the search for ever more impressive and lethal weapons to shock...