The Story of Egypt: The Civilization that Shaped the World 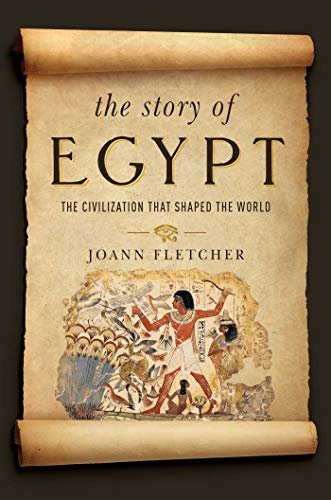 In this ambitious book, Professor Joann Fletcher tells the history of Egypt from the earliest evidence of nomadic peoples, through its many dynasties of Pharaohs, up until the annexation of the country by Rome in 31 BCE. Although a thorough overview of this more than 4000-year period, the book lacks any sustained analysis to retain the reader’s attention. Newcomers to the subject may find it useful to establish a linear narrative, but anyone looking for more will be disappointed.

Professor Joann Fletcher cuts a distinctive figure. Sporting a shock of flaming red hair, dressed in black and normally wielding a black umbrella to ward off the relentless Egyptian sun, she has captivated audiences in her passionate documentaries about Ancient Egypt on BBC Four. Her recent series, Immortal Egypt, covered virtually the same content as this book, ranging from the oldest rock drawings in north Africa at Qurta, to the fall of Cleopatra VII and Egypt’s annexation by Rome. The show was a resounding success. By dividing Egypt’s story into neat digestible chunks, whilst also maintaining a high level of complexity, it managed to be both informative and dramatic. Unfortunately, Fletcher’s book version is almost exactly the opposite.

Beginning with the nomadic communities that initially settled in the Nile Delta, Fletcher starts promisingly enough. For example, her analysis of early burials, where bodies were interred in the foetal position and sprinkled with red ochre to symbolise the blood of childbirth, is both vivid and fascinating. She describes the evidence that survives with great aplomb. Artefacts are described in minute detail, interpretive fallacies exposed with gentle humour and the subtle change of Egypt into a settled, proto-urban state is patiently revealed to be due to the Earth’s shifting climate.

Once Fletcher reaches the dynastic periods of Egypt, however, things begin to go downhill. The truth is that there are hundreds upon hundreds of Pharaohs and not enough space to do them justice in just over 350 pages. Although the author must be praised for continually bringing colourful details into play throughout the book (such as the anecdote about Rameses II dyeing his hair grey), she cannot wholly avoid creating the literary equivalent of a King’s list. Some rulers are only mentioned to reveal who succeeded them, and even the more famous in the catalogue are ruthlessly confined in the amount of attention they receive. Even the section on Fletcher’s self-professed favourite, Amenhotep III, is merely a linear description of the events of his reign. Unlike her opening section, where Fletcher engages the reader in some real analysis of the evidence, the main part of the book feels frankly repetitive – it is merely a succession of “and then… and then… and then”. Only the last section of the book, which focuses on the Ptolemaic kings, relieves the tedium of this, if only because the events are so salacious. As a court racked by murder, incest and nearly continuous civil war, it reads like a synopsis of Game of Thrones.

In one sense, Fletcher does fulfil the task she sets herself. A story, after all, is a narrative at its most basic level – a telling of events. Nevertheless, in the general stipulation that stories must have a ‘beginning, middle and end’, there is the suggestion of causality and connection. Stories are about journeys, about change, and most importantly about WHY they happen. Professor Fletcher certainly gives us a sense of the longevity of the Ancient Egyptian culture, and the multitude of kings, but she does not explain to us why this amazing country experienced the success that it did, or why it eventually succumbed to other powers. Yes, the last native Egyptian pharaoh, Nectanebo II, was driven out by the Persians, yes Cleopatra and Anthony lost the battle of Actium to Octavian, but what was their weakness, where was their enemies’ advantage, what did those defeats mean? Fletcher makes no attempt to answer this and so, in my opinion, The Story of Egypt is only partly told.

Sadly, this lack of argument means the staggering amount of information becomes overwhelming. Moving from Userkaf to Sahura to Neferirkara within the space of a few pages does not give much time for the unfamiliar names to sink in or their significance to become apparent. It needs Fletcher’s authoritative voice (although sadly without her delicious Barnsley accent, which cannot be transmitted via paper) to guide us through this, to point out the links, the trends and consequences, for the avalanche of material to take on a comprehensible shape. As it stands, however, Fletcher leaves us to wade through it alone. Information we have, but story we do not.

$29.95
plus shipping
$35.70
free shipping worldwide
By purchasing books through this website, you support our non-profit organization. Ancient History Encyclopedia receives a small commission for each book sold through our affiliate partners.

Ptolemaic Egypt rapidly established itself as an economic powerhouse...
Article

One of the central values of ancient Egyptian civilization, arguably...

Fletcher, J. (2017, January 11). The Story of Egypt: The Civilization that Shaped the World. Ancient History Encyclopedia. Retrieved from https://www.ancient.eu/review/155/

$29.95
plus shipping
$35.70
free shipping worldwide
By purchasing books through this website, you support our non-profit organization. Ancient History Encyclopedia receives a small commission for each book sold through our affiliate partners.
Remove Ads