The Vandals: Conquerors of the Roman Empire (Battleground I) 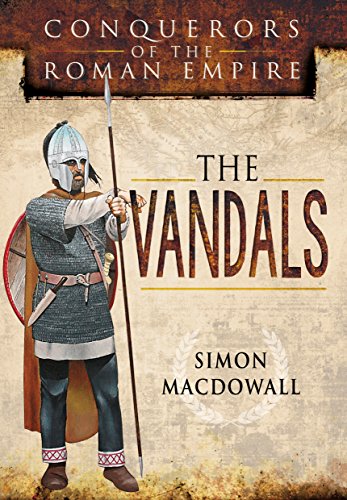 The Vandals by Simon MacDowall is a wonderful book to read. His writing style brought the Vandals to life quite easily. MacDowall has a talent for telling the story of a people that many people don’t bother learning about. He tells it in a way that makes the Vandals seem like the most interesting group of people to have lived. It is a book that is accessible to nearly all people with a basic understanding of early European history.

The author starts by giving an overview of who the Vandals were, what they did, the sources we have regarding them, and their origins. He then begins to tell their story. He starts in the mid-fourth century with the Germanic tribes being thrown into disarray because of the Hun expansion westward and the problems that were caused. He then moves to the end of the fourth century with the Huns moving even farther westward sending a new wave of refugees towards the Roman lands. This time the Huns went far enough west to cause the Vandals to join the refugees fleeing from the Hun’s path. From here he follows the Vandals’ beginnings to their rise in power near the Rhine River, their plundering through the Alps, and their decent into Spain, conquering most of it in the process. The Romans were not able to stop this assault from the Vandals and the Alans and protect their province of Spain.

Throughout all of this history MacDowall does an incredible job at distinguishing between the different tribes that played a part in the Vandals’ history, the tribes within the Vandals, and which of all of those tribes were doing what. He continues narrating the Vandals’ venturing through Spain and the dramas that played out before they embarked to Africa in 429 CE under the new king Gaiseric. This was due to the pressure being put on them by Rome’s ally, the Visigoths.

MacDowall spends the final chapters and quite a bit of space detailing the days of the Vandals in Africa,  and their achievement of overrunning some of Rome’s richest provinces as well as establishing a stable kingdom for some time. They were masters of the sea during this period and even sacked Rome itself in 455 CE. He then details their conquering by Belisarius and their disappearance from history in the final chapters of the book.

Overall this was a wonderful book to read. The detail and prose make for an enlightening, enjoyable, and easy read. The biggest problem with the book is the lack of editing that has been done. There are numerous punctuation and spelling errors that sometimes distract the reader from the narrative. Aside from those errors, the book is very well done. The narrative flows logically and the ideas throughout the book are easy to follow. I would recommend this book to anyone interested in European history, Roman history, or the Vandals’ themselves!

$26.00
plus shipping
$36.07
free shipping worldwide
By purchasing books through this website, you support our non-profit organization. Ancient History Encyclopedia receives a small commission for each book sold through our affiliate partners.

North Africa’s Place in the Mediterranean Economy of Late Antiquity

The Mediterranean Sea was the economic focal point of the Roman...
Article

The Battle of Tricamarum (533 CE) was the second and last major...

$26.00
plus shipping
$36.07
free shipping worldwide
By purchasing books through this website, you support our non-profit organization. Ancient History Encyclopedia receives a small commission for each book sold through our affiliate partners.
Remove Ads