The Carthaginians (Peoples of the Ancient World) 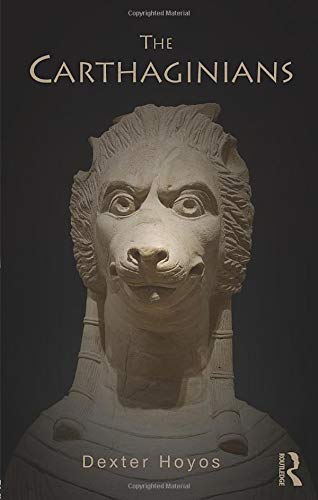 An excellent short book expertly covering the history and culture of one of the ancient Mediterranean's most influential civilizations.

The Carthaginians were obliterated by the Romans in the Third Punic War, and their history has, ever since, suffered for it. Even their name has largely been replaced by the brutal sounding ‘Punic’, from the Latin punicus. In the last decade the Roman carpet under which was swept for millennia the finer details of Carthaginian culture has finally been lifted a little. In addition, Dexter Hoyos’ The Carthaginians has the merit of being one of the few books in an already impoverished body of literature which deals with this fascinating culture without continual reference to their nemesis Rome. Here they stand proud and loud as a successful and influential civilization in their own right, not just one of Rome’s early enemies.

The book is neatly divided into chapters which present a combination of the chronological evolution of Carthage, beginning with the city’s founders the Phoenicians, and a thematic model where such facets of the culture as religion, government, empire, trade, architecture, and society are dealt with in detail in individual chapters. The latter half of the book then examines the city’s history once the wheel’s started to come off, or perhaps more aptly, when the Carthaginian trading ships started to get that sinking feeling – first defending their interests in Sicily against the Greek tyrants and then the long and draining Punic Wars. The book concludes with a summary of history’s view on Carthage.

At 220 or so pages this is not a mammoth treatment, but all the essentials are to be found, and there are several topics and many details which are missing from other works on Carthage. The volume, therefore, offers a unique insight into a society that was highly successful for six centuries before it unwisely picked a fight with the Romans. The success of Carthage’s colonization project in Spain, their exploration of the Atlantic coast of Africa, the shady internal power politics between the ruling families, and the city’s unique form of government are just some of the areas this book sheds light on.

With a smattering of black and white photographs, select bibliography, and detailed index this is highly recommended as both an introduction to the Carthaginians or as a supplement to an existing library which may neglect the non-military aspects of Carthaginian history.

$46.92
plus shipping
$48.42
free shipping worldwide
By purchasing books through this website, you support our non-profit organization. Ancient History Encyclopedia receives a small commission for each book sold through our affiliate partners.

The Carthaginians, like their Phoenician forefathers, were highly...
Article

Genocide in the Ancient World

Genocide is often viewed as a particular feature of our own current...
Article

The Battle of Zama - The Beginning of Roman Conquest

The Battle of Zama (202 BCE) was the final engagement of the Second...

$46.92
plus shipping
$48.42
free shipping worldwide
By purchasing books through this website, you support our non-profit organization. Ancient History Encyclopedia receives a small commission for each book sold through our affiliate partners.
Remove Ads