Roman Historiography: An Introduction to its Basic Aspects and Development 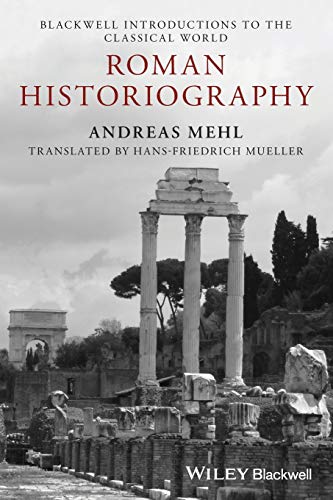 We know the big names - Cicero, Diodorus, Caesar, Livy - but we forget how periods in Rome's history were recorded by multiple people, mostly at the same time. Many times history books were a not just a narrative but a composed book of first-hand accounts and opinions from that time period. Roman Historiography by Andreas Mehl attempts to aid the reader in understanding how exactly the Romans recorded and interpreted history. Do not let the title of the book deceive you, this book is definitely not a boring read. From conflicts to political intrigue, Mehl shows the reader the depths of what went into Roman historiography, both in the lives of the historiographers and the events surrounding them.

Roman Historiography is a book divided into approximately 8 different parts, with each part (or chapter) dedicated to a different time in Rome's history - from beginning to end. Mehl even puts the effort into describing the early church and the fall of the Western Roman Empire. Each chapter is divided into even smaller parts - individual authors. Mehl does an excellent job in going into detail about each author's life, how they lived and what their views of the world they lived in were. He gives a short statement at the end of each section determining whether the author's works are accurate as well as the objectivity of the author when it came to political or national conflicts. The form in which Mehl gives this information is intriguing, as much of the information about Roman historiographers are unknown or not greatly publicized.

As mentioned before, many times when we think of Roman historians we think of Cicero, Livy, Tacitus, etc., but we forget how a majority of their books were, in fact, compilations of manuscripts written by others. Mehl makes the point that while these authors made their own works, historiography was often created in antiquity through reinterpretation. He goes into very large depth explaining how exactly historiographers wrote down history and what their goal was for that history. Many "smaller" authors wrote down current events of their day or even local events, which in turn gave the "larger" authors we are familiar with today more material to put in their history books. While authors did write down history for the sake of records or literature, many historians were senators or political figures that made histories to push their own political views, or in some cases, the current ruler's point of view. Continuing on the point of genres, Mehl investigates the form of the histories written, stating how not only did histories push political ideas or record current events but were also seen as a form of entertainment. Many times histories were read publicly or passed around cities as a way to understand their recent ancestors or investigate how life was in an earlier period.

The topics that Mehl covers in Roman Historiography are beyond interesting. From the formation of Rome to the early church, Mehl does not shy away from dealing with issues that were within the Roman Empire and many that are still debated by historians today (ie. Caesar's Civil War). His in-depth studies of the lives of these Roman historiographers are also a topic of interest, as many times history is accepted without studying the source from whence it came. It forces the reader to figure out which Roman historiographers should be regarded as truthful or deceiving. Overall, these several topics really grab the interest of the reader as they are unusual topics.

While all these topics are interesting, it comes with a price. At points the book became very dry as going over detail after detail on one author can get tiresome. The format stays constant throughout the entirety of the book, many times with myself predicting what was going to happen next before I turned the page. This is the only negative I have found within the book, though many times if the reader ignores the format it is an interesting read.

Overall, Roman Historiography by Andreas Mehl is a book that I would highly recommend to anyone interested in reading the original histories or even any sort of ancient roman text. I enjoyed reading Roman Historiography and I know those of you who do read this book will also. This book gives the reader a comprehensive look into Roman historiography: where it came from and who wrote it. This is an excellent resource and read for those wanting to know more about the history they interact with.

Caleb Curry
I am an aspiring historian and reenactor with a true passion for history. Since I was a small child Ancient History intrigued me, making me a constant and steady researcher of the ancients. I never back down from learning: I accept it with open arms.

Mehl, A. (2016, May 10). Roman Historiography: An Introduction to its Basic Aspects and Development. Ancient History Encyclopedia. Retrieved from https://www.ancient.eu/review/135/