Soldiers and Ghosts: A History of Battle in Classical Antiquity

by Christopher Berg
published on 09 May 2016
Send to Google Classroom:
Rating: 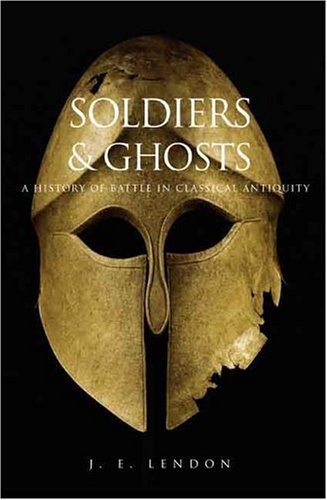 J. E. Lendon in his book, Soldiers and Ghosts: A History of Battle in Classical Antiquity, uses Greek and Roman culture to explain fundamental changes in the conduct of war. Lendon persuasively argues that competition and an obsession with the ancient past were the guiding principles of Greek warfare. Likewise, Roman warfare was characterized by an insatiable lust for single combat and a delicate balancing act between virtus and disciplina.  What makes Lendon's book interesting, too, is the evolution of generalship and command, which reaches its zenith under Julius Caesar and Alexander the Great, only to deteriorate under Titus and Julian. Lendon painstakingly reinforces his argument with ample literary, pictorial, and archaeological evidence. The illustrations and maps are easy to interpret and help the reader to understand, for example, the way phalanxes and cohorts were assembled and structured. This book is appropriate for use in undergraduate and graduate study in military history, classics, and Greek and Roman history survey courses.

Lendon begins by surveying competition, single combat, and heroic deeds in the Iliad. The Iliad contained the history of the Greeks and every Greek military leader and soldier lived to emulate the deeds recorded in it. Glory in battle was determined ". . . not only upon his observed performance but also on the excellence of the defeated . . . (26).” Cavalry and archers were looked upon with disdain in the Iliad because cavalryman could flee from combat and an archer killed from a distance. However, in the Odyssey, archery is a "heroic achievement par excellence (34).”  This is one of many contradictions in the Iliad of what is considered heroic and what is not.

Precepts from the Iliad trickled down through the centuries. Leonidas and Amompheretus exemplified the idea of passive courage best. The Spartans, led by Leonidas, gave their lives voluntarily to defend Greece. They knew they were going to an early grave but they placed too much importance in the ideals inculcated in them from birth – that a Spartan does his duty and will hold his ground. At the battle of Plataea, another Spartan defied his superior’s orders because it went against conscience. Amompheretus would stand his ground and not leave his original position. Though his actions resulted in devastating losses, Amompheretus was honored as the third bravest of the battle. Flagrant disobedience was not punished but rewarded.

Phalanx was, in theory, supposed to meet opposing phalanx on a flat plain and both were to fight hand-to-hand until one phalanx was worsted by the other. To some generals, this was lunacy. They would employ various devices, trickery to name one, to see that they were victorious and to ensure that their men would live to fight again. Tension was palpable between generals and rank-and-file because they were given “command” in loose terms. They were unable to dictate to those under their command as is common in the modern era. If the men wanted battle, it was unwise for a general to delay fearing to be labeled a coward. This aggressive bloodlust was yet another feature of Greek warfare that kept it more connected to the distant past than the future.

The Homeric ideal was personified in Alexander. Lendon argues that Achilles served not only as Alexander’s idol and as mentor but was also the measuring stick with which he compared himself.

The Homeric ideal was personified in Alexander. Lendon argues that Achilles served not only as Alexander’s idol and as mentor but was also the measuring stick with which he compared himself. This obsession, according to Lendon, fueled a rivalry that began in Alexander's youth. The notion that Alexander was competing against the deeds of Achilles would explain Alexander's propensity to put his person constantly at risk. To illustrate this, Lendon focuses on Alexander’s bravery at Issus: “In battle, Alexander took two blows to the breastplate, one on the helmet, and three upon the shield, a testimony to his Iliadic Homeric? heroism (119).”  To sum up the chapters on Greek warfare, Lendon concludes covering two battles in Persia between Alexander’s lieutenants: Antigonus and Eumenes. Both men employed Alexandrian tactics to good effect but both erred when they possessed the advantage. Antigonus, the seasoned warrior, defeated Eumenes, a bureaucrat, at Gabinae.

The second half of the book covers Roman military history. Rome began fighting their neighbors as a phalanx and often sought single combat as a way to bolster one's reputation and impress one's superiors. At the turn of the 4th century BCE, the phalanx was scrapped and the manipular legions were introduced. The selection of soldiers in Rome was unique and unlike any of their contemporaries. The beauty of such an arrangement was that individual strengths were given precedence over familiarity and cohesiveness as a group. Whereas Greeks focused on camaraderie and shared loyalties, Romans focused on the talents of each individual. Single combat was encouraged in certain situations but would be punished severely too.  Lendon cites two examples of fathers executing their sons for disobedience and engaging in single combat. A soldier was expected to display virtus and disciplina simultaneously. Romans persisted in their belief that war should be fought one-dimensionally. In other words, battle should be fought face-to-face with the best man as the winner.  Even the legendary Scipio Africanus "was severely criticized at Rome for lack of aggression, for moving too slowly, and for spoiling his soldiers (p. 207).”

Lendon devotes two chapters to the battle of Gergovia in Gaul and Jerusalem in Palestine. He contrasts the leadership style of Julius Caesar at Gergovia and Titus at Jerusalem and the methods employed by each general. At Gergovia, Caesar utilized Greek strategy.  However, the manipular legions were supplanted by cohorts. Cohorts "allow the commander a great deal of flexibility in a arraying his line of battle (235).” Willful disobedience and bad communication nearly cost Caesar his reputation and his legions. Many centurions died at Gergovia giving their men time to flee. Caesar lost more officers than legionaries. In the Holy Land, Vespasian handed over command to his son Titus. As supreme commander in his late 20s, Titus proved to be an able general with a penchant for close combat. Like Caesar, Titus struggled to restrain his men from foolhardy endeavors. Nevertheless, Titus was not content merely issuing orders and commanding from afar. He wanted to be at the forefront of battle and in the mix of action. Titus' own impetuous example may have spurred his men to push the limits and seek glory in emulation of their general. In this respect, Titus shared more in common with Alexander than with Caesar. During Titus's campaign, auxiliaries were employed specifically for hand-to-hand combat while legionaries specialized in fortification, engineering, and the like. Virtus associated with auxiliaries and disciplina, “. . . [which] came to include . . . nearly every military excellence that was not encompassed under virtus, including training and building,” with legionaries (252).

Roman ways of fighting gave way, yet again, to Greek ways of fighting by the 4th century CE. Lendon concludes his survey of Roman military history and his book with Julian's campaign in Persia. Julian was at a great disadvantage from the beginning. What Lendon fails to tell the reader is that Julian, before he ascended to the purple, was educated in Athens as a philosopher. He was trained in all-things Greek and preferred to speak in Greek too. It is very likely that he favored Greek military theory and culture in comparison to his less-cultured Roman heritage. Julian was thoroughly brainwashed with Greek ideas and his military decisions were naturally guided by Greek strategies and tactics. His decision to bypass Ctesiphon as an impregnable bulwark, though Roman commanders had successfully laid siege to it in the past, and burn his baggage train on the river were two costly mistakes that would ensure his untimely demise. These decisions must have been weighed by Julian who, like Marcus Aurelius, would spend many late nights in study and meditation. Why did he choose such a course?Simple: because he took his cues from Greek history’s greatest epic and hero – the Iliad and Alexander.

Lendon covers all the key points of Julian’s campaign and asks the right questions and, where history fails to provide a straightforward answer, provides his own. It is interesting, however, to note Lendon’s silence concerning Julian’s predilection for following omens and basing decisions upon their interpretation. A careful study of Ammianus Marcellinus’ Res Gestae would reveal numerous omens and Julian’s often-precipitous actions. Despite being educated and worldly, Julian was haunted by the supernatural and was very superstitious. This may have more to do with his Greek education that his Roman upbringing.  Lendon utilizes the best historical source on Julian with an eyewitness account by Marcellinus but minimizes Julian’s Greek connection.  Aside from a few minor omissions and dubious conclusions, Lendon has written an outstanding chapter on Julian.

Lendon's book is a delight to read. He offers a different lens for viewing Greek and Roman military history. With determination, Lendon substantiates his thesis with a variety of sources, ranging from various primary sources to archaeological evidence, and the annotated bibliography aids students in pursuing further studies.  Lendon argues that culture, not technology or any other external force, dictated the slow advancement and even regression of the evolution of warfare. His interpretations and conclusions are stimulating even if one does not completely agree.

$15.29
plus shipping
$21.40
free shipping worldwide
By purchasing books through this website, you support our non-profit organization. Ancient History Encyclopedia receives a small commission for each book sold through our affiliate partners.

The Battle of the Catalaunian Fields (also known as The Battle...
Article

The Battle of Mons Graupius was fought in 83 CE between the...

Lendon, J. E. (2016, May 09). Soldiers and Ghosts: A History of Battle in Classical Antiquity. Ancient History Encyclopedia. Retrieved from https://www.ancient.eu/review/134/

$15.29
plus shipping
$21.40
free shipping worldwide
By purchasing books through this website, you support our non-profit organization. Ancient History Encyclopedia receives a small commission for each book sold through our affiliate partners.
Remove Ads