Religion and Ideology in Assyria (Studies in Ancient Near Eastern Records) 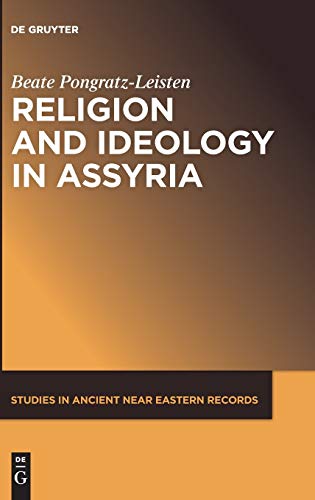 Beate Pongratz-Leisten is a Professor of Ancient Near Eastern Studies at New York University (Institute for the Study of the Ancient World). With an already extensive CV of articles and books relating to the history of the ancient Near East, this work is seminal in the field of Assyriology. The seed of Religion and Ideology in Assyria began in 2003 and the final product was published in 2015. So, her work is in many respects the heart and soul of her academic experience. As a result, Religion and Ideology in Assyria provides an extremely in-depth understanding and analysis of how Assyrian ideological discourse “reflected and informed power relations” in the “history of Assyrian kingship and its conception in myth, historiography, ritual, and imagery” (9). In this light, I will provide a summary and critique of her work.

Chapter I introduces methodological issues, history of research, and states a purpose to explore “dynamics between religion and ideological discourse” (40) in Assyria. She is careful to draw out that she focuses not only on Mesopotamia proper but also, and rightly so, cultural interactions with Syrian and Anatolian cultures which influenced certain ideology. Chapter II identifies early scholarly discourse about kingship through Ur III period writing, Early Dynastic iconography, and other cultural influences. In doing so, she demonstrates why Assyrian kings were so successful, pointing towards “a rich tapestry of traditions from which to weave their particular ideological discourse” (92). Chapter III  traces the spread of Sumero-Babylonian traditions into the North, how Assyria appropriated these traditions with local traditions, and establishes two fundamental ideas in the cultural framework of royal ideology: the Assyrian king as a steward of the deity Aššur, and his relationship with Ištar. Chapter IV proceeds to illustrate the discourse in which Assyria developed a sense of empire as cosmos, or universal control, through various royal and literary texts and sociopolitical conditions. The motif of universal control finds its pinnacle with Sargon II, for whom records demonstrate a desire to found the new city as a king in a primordial act of creation.

Chapter V inspects how the political and religious dimensions of Assyrian kingship were mutually dependent, illuminating royal ideological emphasis on hunting, warfare, and the building of temples as legitimizing tools in narrative and the cultural reasoning behind the tropes. Chapter VI expands upon the “Hunter” trope and traces the discourse in which the Assyrian king acquired attributes of Ninurta from early myth texts. Having established the mythic underpinnings of royal Assyrian discourse, Chapter VII argues that royal inscriptions were not merely manipulative and propagandist; rather they should “be read as tools with which kings identified themselves as individuals acting at a particular moment in history” (288). Chapter VIII draws out just how myth provided a narrative mode for royal inscriptions through intertextuality with myths, thereby engaging with Assyrian cultural memory and producing meaning. Expanding on the intertextuality between royal inscriptions and myth, Chapter IX explores how individual Assyrian rulers interacted with and redacted cultural elements as a type of historiography  in order to proclaim success and establish themselves as paradigmatic models of kingship.

Shifting gears, Chapter X explores how Assyrian appropriation of cultic practice and ritual served to reinforce, or in some cases construct anew, Assyrian royal ideology. Finally, Chapter XI broadens the focus from motif discourses to the importance of scholars within the Assyrian kingship circles as contributors and fashioners of the image of Assyrian kingship and royal ideology and the carriers of cultural memory.

Without a doubt, I am more than impressed with Pongratz-Leisten’s book. Her erudite analysis draws on a massive variety of interpretive approaches, providing her with the resources to effectively draw out the lengthy discursive traditions of royal ideological discourse. Furthermore, her ability to fully illuminate the accumulated and re-worked royal ideological tropes through the time and space with such clarity is important as it provides a framework and analysis for considering critical historical issues in the future. She expertly maneuvers the contours and nuances of tropological discourse in royal ideology and provides a rock-solid text for understanding how motifs developed through history. Regardless of the period or region of Mesopotamian history which one may be studying, this book is valuable either to identify how Assyrian royal ideology was unique in comparison to other traditions or to further the uniqueness of Assyrian royal ideology.

While admiration is great, I do have an important, albeit small, critique. In exploring divine knowledge as a model for kingship, Pongratz-Leisten notes that “ancient Near Eastern knowledge is primarily practical rather than moral or philosophical” (273-274). She uses this argument to explain the type of scholarly knowledge and expertise acquired by Esarhaddon (680-669 BCE) as a legitimizing tool for his kingship. I wonder, though, what she means by “moral or philosophical”. Contextually, these terms carry quite a bit of weight and are often times controversial. Rather than immediately distinguishing these categories as not practical, Pongratz-Leisten would have done well to engage with them. Consider, for example, Mark van de Mieroop’s very recent publication Philosophy before the Greeks (Princeton Press, 2015) in which he argues that there was, in fact, such a thing as Babylonian philosophy.

Aside from this small critique, which ultimately does not take away from the grandeur of her work, I highly recommend Religion and Ideology in Assyria. Although most people will not read straight through the work as I did, it is nonetheless a fantastic resource on the development of various myth motifs and how they were appropriated in various time period for various rulers. One potential I see following this work is further analysis about how various tropes within Assyrian ideological discourse may have influenced ancient Israelite religion and kingship. Based on the value of her work, I am excited to see how others utilize it as a starting point for further recognizing the impact of Assyrian royal ideological discourse.

Originally posted at The Biblical Review

$131.99
plus shipping
By purchasing books through this website, you support our non-profit organization. Ancient History Encyclopedia receives a small commission for each book sold through our affiliate partners.

The foundation of the Assyrian dynasty can be traced to Zulilu...
Article

Sammu-Ramat and Semiramis: The Inspiration and the Myth

Pongratz-Leisten, B. (2016, April 02). Religion and Ideology in Assyria (Studies in Ancient Near Eastern Records). Ancient History Encyclopedia. Retrieved from https://www.ancient.eu/review/125/

$131.99
plus shipping
By purchasing books through this website, you support our non-profit organization. Ancient History Encyclopedia receives a small commission for each book sold through our affiliate partners.
Remove Ads