Documents of Ancient Greek Music: The Extant Melodies and Fragments 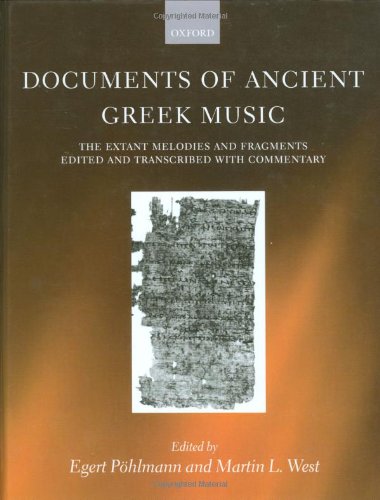 In some ways, the title ‘Documents of Ancient Greek Music’ (DAGM) is slightly misleading, since some two-thirds of these documents are ‘Roman’. Pedantry aside, while many of these 61 documents are by date Roman, they are all composed in Greek, both the text and the notation (which is based on the Greek alphabet). While it may come as a surprise to some that so much written music has survived from the ancient world, many of the surviving passages are quite fragmentary. However, some complete melodies survive, such as the songs of Mesomedes (court composer to Hadrian), or the famous song inscribed on the Seikilos epitaph.

DAGM discusses each composition in chronological order, ranging from the 3rd century BCE to the 3rd century CE, highlighting the source of the melody in more detail (papyrus, inscription, or manuscript). Unlike Pöhlmann’s previous corpus of ancient Greek music (Denkmäler altgriechischer Musik, 1970), it does not include dubious or spurious passages of ancient Greek music, which for me is a shame. That DAGM was written by two of the leading scholars in the field is obvious in many ways, one of which is the meticulous nature with which the sources are presented, each including a detailed discussion of issues concerning pitch-accent, rhythm, and provenance. A critical apparatus is provided for both the text and the notation.

However, the detailed nature of DAGM does mean that this book is not overly accessible to those with no prior knowledge of the musical notation system used by the ancient Greeks and Romans. That this is not a book for beginners is expressed in the introduction (p.6), where the reader is directed to West’s influential ‘Ancient Greek Music’ (1992), which gives a solid introduction to the notational system and Greek music more generally. For anyone seriously interested in the music of ancient Greece and Rome, though, DAGM is a must. Nevertheless, the volume perhaps could have been improved by the inclusion of a single page chart of the 140 odd different symbols used to notate vocal and instrumental music, I doubt very few people have them memorised. DAGM presupposes a lot of previous knowledge.

Nevertheless, by presenting the ancient Greek melodies side-by-side with modern transcriptions, those with no prior knowledge of Greek musical notation, but who have some knowledge of modern western notation, can still access the surviving melodies. That this volume is designed for a more scholarly audience is further attested by the absence of translations of the Greek, though these can generally be found elsewhere.

DAGM was created by way of an update to Pohlmann’s 1970 corpus, adding 23 fragments which have been discovered since then. While DAGM will be the go-to volume for anyone seriously interested in the music of ancient Greece for a long time to come, I hope that projects such as ‘Ancient Lives’ mean that another updating of the corpus will be needed sooner rather than later!