Religions of the Constantinian Empire 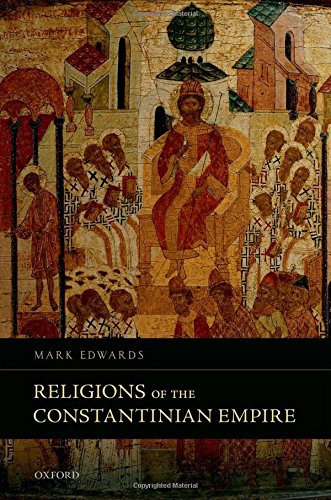 Religions of the Constantinian Empire by Mark Edwards is a phenomenal book. He writes a very comprehensive book on the beginnings of and influences on Christianity in the Constantinian Empire. He divides his study into three parts. The first is of the efforts of Christians to construct their own philosophy and their own patterns of the philosophic life, in opposition to the Greek philosophy of Platonism. The second shows the survival, variation, or decay in religious practices that were not requisite under Roman law. The third reviews the changes, both within the church and in the public sphere, which came about because of the rise of a Christian monarch. The first section is familiar to a historian of philosophy and focuses heavily on the Neoplatonist philosophers and early Christian philosophers. The second contains much of the history of religion, and the third section will be familiar to those who know of the history of theology.  All three sections make many references to the political state of the empire under various emperors, the persecutions under Diocletian, the rule of Constantine, and the Council of Nicaea.

Part one is entitled Philosophical Variations, and embraces a number of figures that are not necessarily in a conventional history of philosophy. This section contains quite a few unfamiliar terms and people that a lay-man would likely not know of. This section discusses the works of Origen and Clement of Alexandria, Eusebius’s apologetic treatises, Arnobius and Lactantius, Eusebius’s African contemporary thinkers, Plotinus, Iamblichus, and others. He does a very good job showing the different variations between Eusebius’ works and the works of other similar early philosophers.

Part two, entitled Religious Plurality, includes the cults that are represented as demonic burlesques of the sacraments by Firmicus Maternus. None of the cults were equal to Christianity to be considered its rival. He writes of the rise of Manichaeism, Gnosticism and its texts, and alchemy. All of these survived in some fashion yet the cults of Isis, Mithras, and Bacchus disappear. He addresses the reasoning behind all of these. He also writes of Constantine’s efforts so that no one would become a Jew that had not been born a Jew.

Part three, entitled Christian Polyphony, moves on from the attempts to make Judaism obsolete to the shift in relations between the church and civic cults following the emperor. He discusses that the zeal for the propaganda that was Christianity was tempered only by Constantine’s sense of a ruler’s duty to his people. He argues that the Eucharist was as much a structural as a symbolic equivalent to the institution. Readings of the Old Testament would have been fantastic to scholars that were forced upon early Christians by their unwavering literalism. He writes of Eusebius and Origen’s arguments for the figure of Christ and who or what he was.

Mark Edwards’ book is very well written and scholarly. He cites a large number of sources and clearly knows what he is talking about. The book is fantastic and very interesting. It is hard to put down. Though, there is a lot of information to process and much of it is in language that requires some time to understand. I wouldn’t recommend it to someone who knows little of Greek philosophy or religion in the first few centuries C.E. I do not think it was meant for a lay audience. That being said, he does a good job of clearly explaining things and expressing them in a way that could be understood with a little reading. Overall this is a fantastic book and I would recommend it to anyone who wants to learn more about early Christianity and Christianity in Rome.

$48.14
plus shipping
$56.80
free shipping worldwide
By purchasing books through this website, you support our non-profit organization. Ancient History Encyclopedia receives a small commission for each book sold through our affiliate partners.

The religious practices of the early Indo-Aryans, known as the...
Article

Another Ariamanus Statue Found: The Evil Spirit of Mithraic Religion

It is rare when a new find creates renewed interest in an old subject...

$48.14
plus shipping
$56.80
free shipping worldwide
By purchasing books through this website, you support our non-profit organization. Ancient History Encyclopedia receives a small commission for each book sold through our affiliate partners.
Remove Ads