In Bed with the Romans 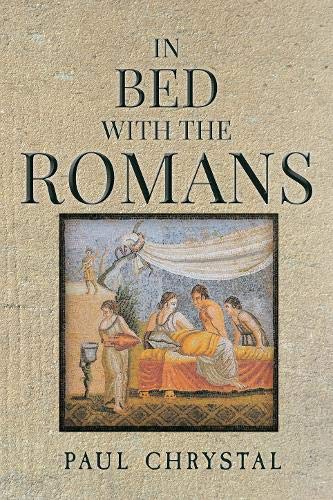 Instead, Paul Chrystal has written a holistic account of what the sex lives of Romans was really like throughout the empire: an unedited version of where and how sexual behavior and sexual morals influenced ancient Rome, both directly and indirectly. In Bed with the Romans describes not only the acceptable and taboo sex acts of the ancient world, but also how sex fit in the daily life of Romans, how social role affected a Roman’s sexual expectations, and how Rome as an empire used sex both as a propaganda tool and social constraint.

The book is split into two distinct sections. The first, In Bed with a Roman, covers how love and sex were treated by Rome itself and by the "average" Roman. Chrystal covers every possible area of everyday sexual life in these chapters, from marriage traditions to gynecologic medicine (a chapter which made me wholeheartedly grateful for modern medicine) to sex and spirituality.

Gender roles for both sexes are covered here in depth, including the individual’s options in life. For women, the three real options were mother (matrona), which included an expectation to immediately and prolifically provide children for her husband and (by extension) Rome, vestal virginity (a rarer option with its own expectation that could and would result in death if broken), and prostitution. Men had more options professionally, but Rome still expected men to marry and provide children to the empire.

Laws and morals in general are handled in multiple chapters, as Chrystal describes the concept of virtus, the role of sex in religion, and the changing landscape of society’s restrictions on sex. Homosexuality, rape, sexual slavery, and the Empire’s view on Roman male virility are all included, with excellent examples and source quotes. Interestingly, the Roman views on appropriate maleness did not exclude homosexuality, as long as the Roman was dominating (not dominated). Rome’s conquests over other cities/nations are celebrated as a sexual conquest. The example provided is Vespasian’s coins, which showed Judea in a female role submitting to the Emperor’s soldier profile.

The second section, In Bed with the Emperors, and an Empress or Two, is where many of the more risqué and shocking tales are found. Chrystal covers all the big incidents, beginning with Augustus and ending with Theodora. Included in the sordid tales is the interesting way men and women in that level of society interacted and influenced each other, depending on the emperor. The chapter on Augustus includes an excellent description of his wife Livia’s political and personal influence on the empire. Augustus’s own marital circumstances began with somewhat less virtue, and his change of tune about marriage and the family eventually drove Augustus to banish his own daughter from Rome for her sexual behavior.

The family tree for Augustus, Claudius, Tiberius, Caligula, and Nero is a fascinating web of sexual mess, and Chrystal’s treatment of them is wonderfully entertaining. Chapter 15: “‘The Whore Augusta’, Incest with Caligula and Claudius, and Nero’s Necrophilia” really says it all. I appreciate that Chrystal does not shy away from any topic, including Tiberius’ depravity with children or the tales from Caligula and Nero’s reign that seem too absurdly awful to be true: “Nero obviously missed the sex with Agrippina. His reaction was to find another woman who looked exactly like his mother.” (Chrystal, 206)

Of course, debauchery and scandal crossed dynasty lines in Roman history. Chapters on Hadrian, Commodus, Elagabalus, and Theodora cover different taboos (Hadrian’s public lover Antoninus, Theodora’s past as a dancer, Elagabalus’ desire to be a woman) and the effects of royalty’s behaviors on their household and the empire. Section two really is the stuff of legend; stories too astounding to make it past Hollywood censors and only hinted at in the movies.

In Bed with the Romans includes photographs of beautiful full-color mosaics, which give a visual glimpse into the ways sex fits in Roman daily life. The pictures depict a range of images: a prostitute’s advertisement of acts for sale, a scene from the Roman baths, a fascinating picture of what appears to be a drinking/sex game from a Pompeii brothel common room, and various mythological and religious scenes. The pictures truly emphasize that while Romans had their own taboos and restrictions on sex, sex and sexual behavior was an openly accepted part of the culture.

Chrystal’s writing style is an interesting mix of scholarly and casual tone. Some of the subject matter is hard to read due to the horrifying topics, and it is easier to get through a section about selling children on the slave market for brothels or disgusting medical procedures when it is clear the author is just as disturbed. He goes a little overboard in the first section’s chapters with external source quotes, jumping from topic to topic using citations without any commentary so the writing appears to be a list of quotes with little context to bring the point together. By section two, quoted source material is integrated well into the flow of the topic, and the scandalous tales about ruling family are told in a more conversational tone.

$12.11
plus shipping
By purchasing books through this website, you support our non-profit organization. Ancient History Encyclopedia receives a small commission for each book sold through our affiliate partners.

Rome under the Julio-Claudian Dynasty

The Julio-Claudians were the first dynasty to rule the Roman...
Article

The Roman-Parthian War of 58-63 CE was sparked off when the Parthian...

$12.11
plus shipping
By purchasing books through this website, you support our non-profit organization. Ancient History Encyclopedia receives a small commission for each book sold through our affiliate partners.
Remove Ads