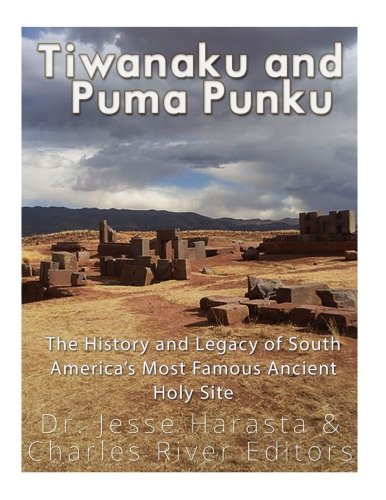 *Includes pictures
*Includes a bibliography for further reading
Few ancient ruins capture the imagination like the mighty holy site of Tiwanaku, located on the high Andean altiplano plateau outside of La Paz, Bolivia. Unlike some ancient sites, such as Machu Picchu in neighboring Peru or Chichen Itzá in Mexico, Tiwanaku has never been “lost”; on the contrary, it has been marveled over for centuries by Incan nobles, Spanish Conquistadores, modern backpackers, and UFO fanatics alike. Despite this history of amazement, Tiwanaku has remained something of an enigma until recently, but it appears that this would have probably been pleasing to its creators. It was created to be a mysterious, sacred, and beautiful place, one with many secrets and a public face characterized by PT Barnum-like showmanship.
Skillful modern archaeology has allowed people to look behind the facade and see, for the first time in many, many centuries, some of the secrets behind it. The story is fascinating, complex, and thoroughly human. The modern visitor arriving to Tiahuanaco finds him or herself in, as Cieza de Léon noted almost 130 years ago, a not very notable, dusty, chilly settlement south of Lake Titicaca. The place would not be of any great interest except that to the east and south of the modern village, within walking distance of the center, rise a number of remarkable ruins.
The ancient world often evokes wonder, respect and even confusion, and few places accomplish any of that more than the incredible ruined stone temple of Puma Punku. Part of the larger ruined city of Tiwanaku in the altiplano plains of modern Bolivia, Puma Punku is a marvel of engineering, stonemasonry and design. These facts are obvious to even the lay observer, as Puma Punku’s stonework is remarkable even for the Andes where visitors have long wondered at ancient stone joints where even a knife bade could not fit between the stones. This level of craftsmanship has caused some, mostly those who have never been to the Andes, to speculate of a fanciful origin for the site, maintaining that such a wonderful and mysterious place must be the work of extraterrestrial or super-human forces.
However, Puma Punku’s stonemasonry is often considered its most notable feature only because until recently so little was known about the site or the Tiwanaku culture that built it. This would be like visiting the ruins of the Vatican or Westminster Abbey centuries from now and being wowed by the quality of construction. While the construction is impressive, that aspect is not the most interesting story that the sites can tell.
Today, through the diligent work of scholars from many countries, the disciplines of archaeology, art history, comparative ethnography and other modern historical sciences have begun to peel back the story of Puma Punku, and historians can once again begin to tell the stories behind the stones. That work has highlighted the enigmatic ruins from many points of view, and have helped explain how it was a place of ritual, showmanship, mythology and, of course, the finest workmanship.
Tiwanaku and Puma Punku: The History and Legacy of South America’s Most Famous Ancient Holy Site examines some of the most important pre-Columbian ruins in the world. Along with pictures of important people, places, and events, you will learn about Tiwanaku and Puma Punku like never before.