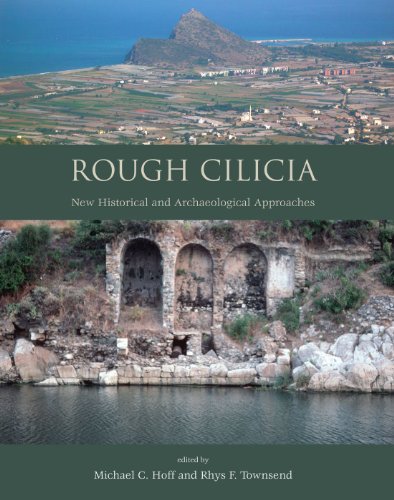 The region of Rough Cilicia (modern area the southwestern coastal area of Turkey), known in antiquity as Cilicia Tracheia, constitutes the western part of the larger area of Cilicia. It is characterized by the ruggedness of its territory and the protection afforded by the high mountains combined with the rugged seacoast fostered the prolific piracy that developed in the late Hellenistic period, bringing much notoriety to the area. It was also known as a source of timber, primarily for shipbuilding.
The twenty-two papers presented here give a useful overview on current research on Rough Cilicia, from the Bronze Age to the Byzantine period, with a variety of methods, from surveys to excavations. The first two articles (Yağcı, Jasink and Bombardieri), deal with the Bronze and Iron Ages, and refer to the questions of colonization, influences, and relations. The following four articles (Tempesta, de Souza, Tomaschitz, Rauh et al.) concern the pirates of Cilicia and Isauria who were a big problem, not only for the region but throughout the Mediterranean and Aegean during the late Hellenistic and especially Roman periods.
Approaching the subject of Roman Architecture, Borgia recalls Antiochus IV of Commagene, a king with good relations to Rome. Six papers (Spanu, Townsend, Giobbe, Hoff, Winterstein, and Wandsnider) publish work on Roman architecture: architectural decoration, council houses, Roman temples, bath architecture, cenotaph, and public buildings. Ceramics is not neglected and Lund provides a special emphasis on ceramics to demonstrate how pottery can be used as evidence for connections between Rough Cilicia and northwestern Cyprus.
Six contributions (Varinliog(lu, Ferrazzoli, Jackson, Elton, Canevello and Özy?ld?r?m, Honey) deal with the Early Christian and Byzantine periods and cover rural habitat, trade, the Kilise Tepe settlement, late Roman churches, Seleucia, and the miracles of Thekla. The final article (Huber) gives insight into methods applied to the study of architectural monuments.

Antiochia ad Cragum (“Antioch on the Cliffs” or “Antioch...
Definition

Aytap is the modern name for the ancient city of Iotapa (sometimes given...
Definition

Side (pronounced see-day) was a city on the southern coast of Cilicia...
Definition