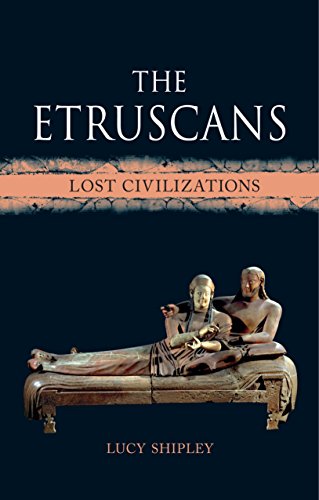 The Etruscans were a powerful people, marked by an influential civilization in ancient Italy. But despite their prominence, the Etruscans are often portrayed as mysterious—a strange and unknowable people whose language and culture have largely vanished. Lucy Shipley’s The Etruscans presents a different picture.

Shipley writes of a people who traded with Greece and shaped the development of Rome, who inspired Renaissance artists and Romantic firebrands, and whose influence is still felt strongly in the modern world. Covering colonialism and conquest, misogyny and mystique, she weaves Etruscan history with new archaeological evidence to give us a revived picture of the Etruscan people. The book traces trade routes and trains of thought, describing the journey of Etruscan objects from creation to use, loss, rediscovery, and reinvention. From the wrappings of an Egyptian mummy displayed in a fashionable salon to the extra-curricular activities of Bonaparte, from a mass looting craze to a bombed museum in a town marked by massacre, the book is an extraordinary voyage through Etruscan archaeology, which ultimately leads to surprising and intriguing places.

In this sharp and groundbreaking book, Shipley gives readers a unique perspective on an enigmatic people, revealing just how much we know about the Etruscans—and just how much still remains undiscovered.