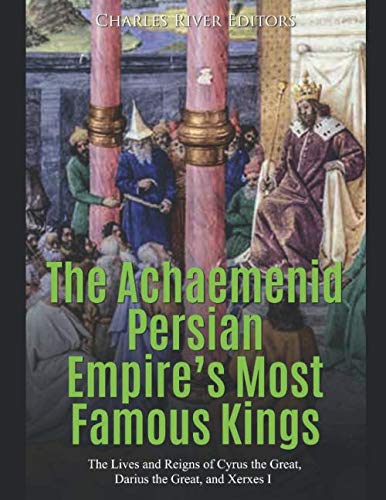 *Includes pictures
*Includes excerpts of ancient accounts
*Includes a bibliography for further reading
At one point in antiquity, the Achaemenid Persian Empire was the largest empire the world had ever seen, but aside from its role in the Greco-Persian Wars and its collapse at the hands of Alexander the Great, it has been mostly overlooked. When it has been studied, the historical sources have mostly been Greek, the very people the Persians sought to conquer. Needless to say, their versions were biased.
It was not until excavations in the region during the 20th century that many of the relics, reliefs, and clay tablets that offer so much information about Persian life could be studied for the first time. Through archaeological remains, ancient texts, and work by a new generation of historians, a picture can today be built of this remarkable civilization and their most famous leaders.
When considering this empire’s rulers, the two most often referenced are Xerxes, the leader of the Persian invasion of Greece which caused the heroic sacrifice of the Spartans and their allies at Thermopylae, or Cyrus the Great, the man who created the empire. While he was one of the most influential men in the ancient world, research on Cyrus the Great is simultaneously fascinating and frustrating. The Persians’ ancestors did not write (in fact, in their epic poems and myths, they claim that it was something taught to man by demons and therefore something to be avoided), and though the Iranians had taken up writing in their governmental and administrative functions by the time Cyrus lived, the kings still did not learn to write. Put simply, it was considered a functional skill, but not of the greatest importance.
As a result, while plenty of ancient sources mention the great Persian king, Persian sources themselves are rare, and those sources that do exist, such as the Babylonian Chronicle, are largely dry and state only the basic facts and large events. By contrast, Greek sources about Cyrus embrace the artistic aspect of their work so highly that the accuracy often comes into question, and sometimes deep scrutiny is necessary to attempt to separate the fact from the fiction. In the end, the full truth about Cyrus and his reign may never be truly understood.
Darius I took the throne after the death of Cyrus’s son, Cambyses II, and though his reign would not have been possible without the construction of the empire and the administrative groundwork laid by Cyrus the Great before him, Darius proved himself just as worthy of the epithet. Reigning for over 35 years, Darius kept control of the massive Persian Empire despite numerous rebellions and uprisings, and he also managed to implement reforms and improvements that established the empire’s golden age. He followed the example of Cyrus before him in his foreign policy and mode of kingship as well, offering tolerance and patience to various cultures and religions, and even treating his enemies fairly in most cases.
Perhaps his ultimate success can be seen most clearly in the passage of power at the end of his life. By that time, his reign had been long and stable, and though he died of illness somewhat unexpectedly, his kingdom was still so firmly established that the kingship passed to his son Xerxes without any question or upheaval. Under Darius the Great’s rule, the empire reached its greatest extent, stretching from the Indus Valley and Central Asia in the east to Libya and the Danube River in the west. Xerxes remains one of the most famous rulers in history because he led the Second Persian War against the Greeks. That war was a veritable clash of civilizations, and had the Persians triumphed, Classical Athens would have been snuffed out and Greece would never have formed the backbone of Roman and Western culture.
This book looks at the lives of the Persian rulers who brought the empire to the peak of its power.