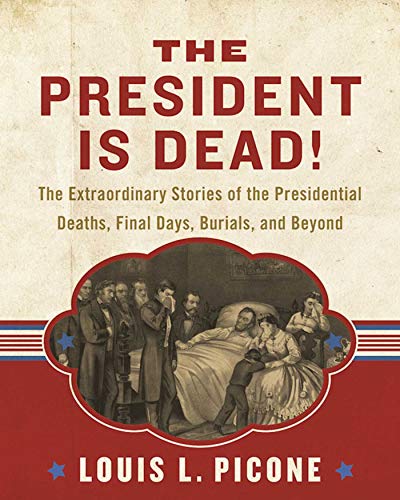 A fun, anecdote-filled, encyclopedic look at the circumstances surrounding the deaths of every president and a few "almost presidents," such as Jefferson Davis.

Packed with captivating stories and presidential trivia, The President Is Dead! tells you everything you could possibly want to know about how our presidents, from George Washington to Gerald Ford (who was the most recent president to die), met their ends, the circumstances of their deaths, the pomp of their funerals, and their public afterlives, including stories of attempted grave robbings, reinterments, vandalism, conspiracy theories surrounding their deaths, and much more.

The President Is Dead! is filled with never-before-told stories, including a suggestion by one prominent physician to resurrect George Washington from death by transfusing his body with lamb's blood. You may have heard of a plot to rob Abraham Lincoln's body from its grave site, but did you know that there was also attempts to steal Benjamin Harrison's and Andrew Jackson's remains? The book also includes "Critical Death Information," which prefaces each chapter, and a complete visitor's guide to each grave site and death-related historical landmark. An "Almost Presidents" section includes chapters on John Hanson (first president under the Articles of Confederation), Sam Houston (former president of the Republic of Texas), David Rice Atchison (president for a day), and Jefferson Davis. Exhaustively researched, The President Is Dead! is richly layered with colorful facts and entertaining stories about how the presidents have passed.

Skyhorse Publishing, as well as our Arcade imprint, are proud to publish a broad range of books for readers interested in history--books about World War II, the Third Reich, Hitler and his henchmen, the JFK assassination, conspiracies, the American Civil War, the American Revolution, gladiators, Vikings, ancient Rome, medieval times, the old West, and much more. While not every title we publish becomes a New York Times bestseller or a national bestseller, we are committed to books on subjects that are sometimes overlooked and to authors whose work might not otherwise find a home.