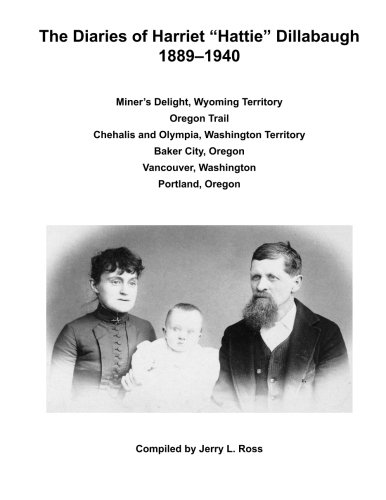 Harriet "Hattie" B. (nee Reigart) Dillabaugh was born on August 5, 1856, in Philadelphia, Pennsylvania, to Adam Wager Reigart and Mary (nee Bender) Reigart. She married Daniel B. Dillabaugh on October 17, 1888, in Lander, Wyoming Territory. Daniel was born near Kilmarnoc, Ontario Province, Canada, fought in the Civil War, served in the U.S. Calvary, helped build the Transcontinental Railroad, and was a gold prospector. Hattie died December 12, 1945, in Portland, Oregon. Her fourteen diaries, containing nearly daily entries, commenced on February 23, 1889, in Miner's Delight, Wyoming Territory. Hattie chronicled early married life in Miner's Delight, traveling from Miner's Delight to Chehalis, Washington Territory, by horse and wagon following the Oregon Trail, and later traveling from Tacoma, Washington, to Baker City, Oregon. Hattie and Dan lived in Baker City from 1892 to 1915, and then lived in Vancouver, Washington, and Portland, Oregon. The last diary entry was made on July 5, 1940, in Portland, Oregon. Hattie's diaries contain a wealth of information for historians, genealogists, and those just interested in what it was like to live in the early years of the northwestern United States. Watching Halley's Comet and an eclipse of the moon on the same night, seeing Buffalo Bill's show coming to town and the Liberty Bell passing through Baker City on a train; learning of President McKinley's assassination, and going to the airport to wait for Charles Lindbergh to land are just some of the historical events Hattie witnessed and wrote about. The appendices of the book include the genealogies of the Reigart, Bender, Dillabaugh, and Lake families; letters that Dan Dillabaugh wrote during and after the Civil War; a newspaper article about the gold prospecting trip that Hattie's husband and son were on in Honduras; and two of son Clyde's diaries. The compiler of these diaries is a former Space Shuttle astronaut who set the current world record for the number of space flights flown. He is fascinated by the pioneering spirit displayed by this brother and sister-in-law of his great-great grandfather. Colonel Ross is equally excited to have discovered his genealogical connection to the Wright Brothers. Exploring and adventure seem to run deep in his family tree.