The Library of Alexandria and the Lighthouse... (Book published 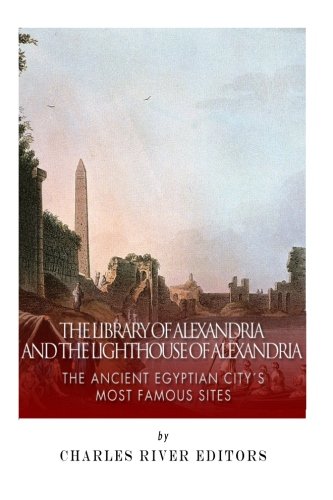 
In the modern world, libraries are taken for granted by most people, perhaps because their presence is ubiquitous. Every school has a library, large libraries can be found in every major city, and even most small towns have public libraries. However, the omnipresent nature of libraries is a fairly recent historical phenomenon, because libraries were still few and far between before the 19th century. For centuries in the Western world, during what is known as the Middle Ages, written knowledge was guarded closely and hidden away in private repositories, usually by the religious classes, and hidden away in private repositories. The lack of libraries in the West helped contribute to the popular imagination of the ancient Library at Alexandria, and all the myths and legends that have come to be associated with it, but the Library of Alexandria deserves its reputation. While the exact nature of the Library remains murky, it functioned for at least several centuries and is believed to have housed hundreds of thousands of books, most written as scrolls on papyrus, and it essentially became the culmination of two ancient literary and cultural traditions converging: the Greek and Egyptian. Of course, the most controversial aspect of the Library of Alexandria is its destruction, which is still a topic of debate today.

Over 2,000 years ago, two ancient writers named Antipater of Sidon and Philo of Byzantium authored antiquity’s most well known tour guides. After the two Greeks had traveled around the Mediterranean, they wrote of what they considered to be the classical world’s greatest construction projects. While there is still some question as to who actually authored the text attributed to Philo and when it was authored, their lists ended up comprising the Seven Wonders of the Ancient World, igniting interest in the ones they chose and inspiring subsequent generations to identify their own era’s Seven Wonders.

The youngest of the Wonders also turned out to be the most practical and one of the longest-lived, surviving into the late Middle Ages. It was a lighthouse built on the northern coast of Egypt in Africa, at the Greek city founded in Alexander's name. It was the Pharos, the Great Lighthouse of Alexandria. Among antiquity’s wonders, the Lighthouse of Alexandria was fairly unique both in terms of its purpose and its secular nature. While pyramids and statues served religious purposes in Egypt and Greece, and others were impressive works of art, the origins of the Lighthouse were not even as a lighthouse at all. Instead, the large formation on the island of Pharos in the harbor of Alexandria was originally meant to help sailors identify the location of the city during the day, and some speculate it was not until later that Alexandrians decided to make it a true lighthouse that would serve sailors at night.

While there is still debate over its height, the Lighthouse of Alexandria was unquestionably one of the tallest man-made structures in the world at the time, if not the tallest. While ancient accounts often exaggerated its height, medieval Arab sources often claimed it was somewhere around 300-350 feet tall, with an incredibly wide base, and those sources wrote at a time where it had already required repairs due to earthquake damage. Efforts to repair it kept going until the 14th century, when the damage was so extensive that it was mostly left in ruins, the last of which were taken for other building projects and/or slipped underneath the Mediterranean. Fortunately, due to descriptions of the lighthouse and archaeological remains, modern scholars are able to understand this wonder better than most, and there may even be future attempts to build a replica and bring it back to life.