Clowns to the Left of Me, Jokers to the... (Book published May 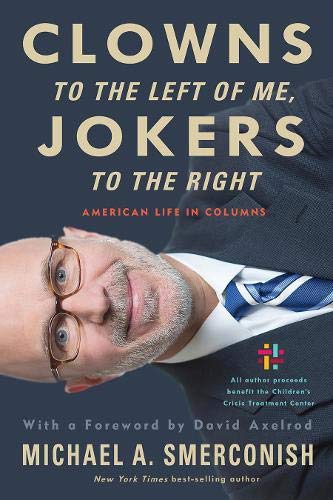 Opinionated talk show host and columnist Michael Smerconish has been chronicling local, state, and national events for the Philadelphia Daily News and the Philadelphia Inquirer for more than 15 years. He has sounded off on topics as diverse as the hunt for Osama bin Laden and what the color of your Christmas lights says about you. In this collection of 100 of his most memorable columns, Smerconish reflects on American political life with his characteristic feistiness. A new Afterword for each column provides updates on both facts and feelings, indicating how the author has evolved over the years, moving from a reliable Republican voter to a political Independent.

Clowns to the Left of Me, Jokers to the Right covers the post-9/11 years, Barack Obama’s ascension, and the rise of Donald Trump. Smerconish describes meeting Ronald Reagan, having dinner with Fidel Castro, barbequing with the band YES in his backyard, spending the same night with Pete Rose and Ted Nugent, drinking champagne from the Stanley Cup, and conducting Bill Cosby’s only pretrial interview. He also writes about local Philadelphia culture, from Sid Mark to the Rizzo statue.

Smerconish’s outlook as expressed in these impassioned opinion pieces goes beyond “liberal” or “conservative.” His thought process continues to evolve and change, and as it does, he aims to provoke readers to do the same.

All author proceeds benefit the Children’s Crisis Treatment Center, a Philadelphia- based, private, nonprofit agency that provides behavioral health services to children and their families.