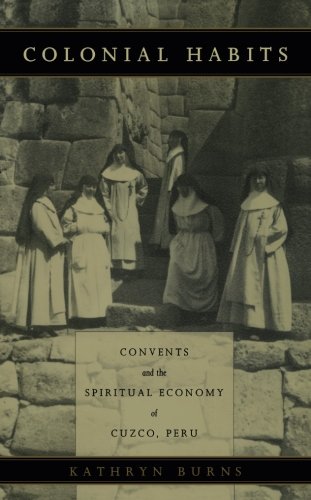 In Colonial Habits Kathryn Burns transforms our view of nuns as marginal recluses, making them central actors on the colonial stage. Beginning with the 1558 founding of South America’s first convent, Burns shows that nuns in Cuzco played a vital part in subjugating Incas, creating a creole elite, and reproducing an Andean colonial order in which economic and spiritual interests were inextricably fused.
Based on unprecedented archival research, Colonial Habits demonstrates how nuns became leading guarantors of their city’s social order by making loans, managing property, containing “unruly” women, and raising girls. Coining the phrase “spiritual economy” to analyze the intricate investments and relationships that enabled Cuzco’s convents and their backers to thrive, Burns explains how, by the late 1700s, this economy had faltered badly, making convents an emblem of decay and a focal point for intense criticism of a failing colonial regime. By the nineteenth century, the nuns had retreated from their previous roles, marginalized in the construction of a new republican order.
Providing insight that can be extended well outside the Andes to the relationships articulated by convents across much of Europe, the Americas, and beyond, Colonial Habits will engage those interested in early modern economics, Latin American studies, women in religion, and the history of gender, class, and race.