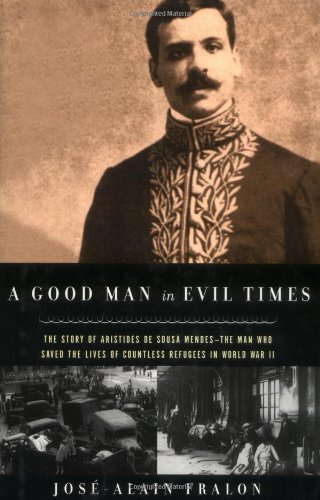 A long-unknown story of individual courage in the face of an authoritarian fascist bureaucracy unfolds in this inspiring biographical tribute to Aristides de Sousa Mendes, the Portuguese consul to France in the early years of the Second World War. After the Nazi invasion of Poland on September 1, 1939, Aristides de Sousa Mendes found himself continually more restricted by the policies of Portugal's prime minister, Dr. Antonio Oliveira de Salazar, who, like Franco in Spain, assumed a position of neutrality but did not wish to offend Hitler. It was Salazar's Circular 14 -- which denied, on the basis of race and religion, visas to the swelling number of refugees to Portugal -- that prompted the fifty-five-year-old Sousa Mendes's first acts of disobedience in his office at the consulate in the temporary French capital of Bordeaux. Over a period of six months in 1940, in accordance with his own conscience rather than Salazar's dictates, Sousa Mendes signed many thousands of visas that spared their recipients, ten thousand of them Jews, a terrible fate in the Nazi death camps. Sousa Mendes's acts of private resistance earned him Salazar's wrath, a forced early retirement, and years of dire poverty. They also won him a place in the pantheon of truly just men and, in Israel, a forest commemorating his tremendous heroism.