The Lost Chronicles of the Maya Kings (Book published May 27 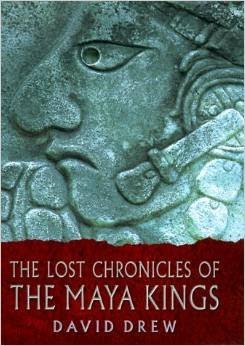 Since the end of the eighteenth century, explorers and archaeologists have made spectacular discoveries in the tropical forests of Central America, the home of the ancient Maya. Across much of present-day Mexico, Guatemala, Belize and Honduras, dozens of their great cities have now been located, many still buried in remote parts of the jungle. Every year fresh reports emerge of the finding of previously unknown pyramids, temples and the tombs of kings. These discoveries offer renewed testimony to the special genius and sophisticated nature of Maya civilization, which reached the height of its glory at the time of the European Dark Ages.

Among all the ancient peoples of the Americas, the intellectual achievements of the Maya were the most astonishing – in maths, astronomy and calendrics, and above all in their system of hieroglyphic writing. For a very long time their script could not be fully understood. But recently, major advances in decipherment have begun to shed a whole new light on the Maya world and those who ruled it. From temple walls and stone stelae planted in the plazas of their cities has come written history: the Chronicles of the Maya Kings.

Drawing on a wealth of sources – from the accounts of early explorers and archaeologists to the most recent research – David Drew charts the course of Maya discovery and presents answers to many of the mysteries their civilization has posed: the nature of Maya religion, the extent of warfare and human sacrifice in their society, how they were able to support vast populations in the fragile forest environment and why, by the time of the Spanish conquest in the sixteenth century, most of their great cities were already lost and forgotten in the jungle. He examines Maya political systems, their achievements in art and architecture and stresses that they are not a lost or dead people. Millions of Maya still live in the region today and, as David Drew shows in this fascinating book, their society illuminates that of their ancestors.