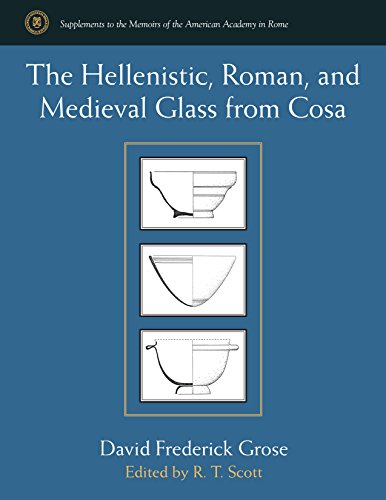 The Hellenistic, Roman, and Medieval Glass from Cosa continues the exemplary record of publication by the American Academy in Rome on important classes of materials recovered in excavation from one of the principal archaeological sites of Roman Italy. Over 15,000 fragments of glass tableware, ranging in date from the mid-second century BCE to the early fifth century CE, were found at Cosa, a small town in Etruria (modern Tuscany). Cosa’s products were chiefly exported to North Africa and Europe, but its influence was felt throughout the Mediterranean world.

The research and analysis presented here are the work of the late David Frederick Grose, who began this project when no other city site excavations in Italy focused on ancient glass. He confirmed that the Roman glass industry began to emerge in the Julio-Claudian era, beginning in the principate of Augustus. His study traces the evolution of manufacturing techniques from core-formed vessels to free blown glass, and it documents changes in taste and style that were characteristic of the western glass industry throughout its long history.

At the time of Grose’s unexpected passing, his study was complete but not yet published. Nevertheless, the reputation of his work in this area has done much to establish the value and importance of excavating and researching Cosa’s glass. This volume, arranged and edited by R. T. Scott, makes Grose’s essential scholarship on the subject available for the first time.