The Architecture of the Roman Empire... (Book published September 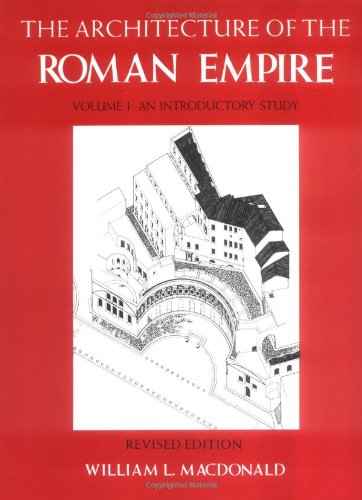 First published in 1965 and now available in a revised edition, The Architecture of the Roman Empire has been hailed as a comprehensive and penetrating account of the rise of Roman Imperial architecture, an architecture whose great vaulted spaces and monumental exteriors defined such terms as “palace” and “Pantheon” for all time.
William L. MacDonald documents the genesis of this new architecture by describing, analyzing, and evaluating four key monuments erected in Rome between A.D. 60 and 130: the palaces of Nero and Domitian, the first true palaces of Europe; Trajan’s Markets (besides his Forum), a superb example of Rome’s highly original social architecture; and the mighty Pantheon. Planned and constructed for the paramount city of the Empire, these building radically altered the history of design and construction. The essentially urban architecture they defined soon appeared in hundreds of prosperous cities and towns, evoking an imagery of Rome throughout its dominions and later carrying many Roman concepts of design into Mediterranean and European architecture.
The emphasis throughout is upon the direct testimony of the buildings as they stand today, and the text is augmented by many plans, reconstructions, and photographs. For the revised edition MacDonald has updated the bibliography and added a new chapter in which he reviews recent studies and continues to probe questions of style and significance that he raised earlier. This book stands as one of lasting value to architectural historians, archaeologists, and the classicists as well as to students of ancient history and culture.