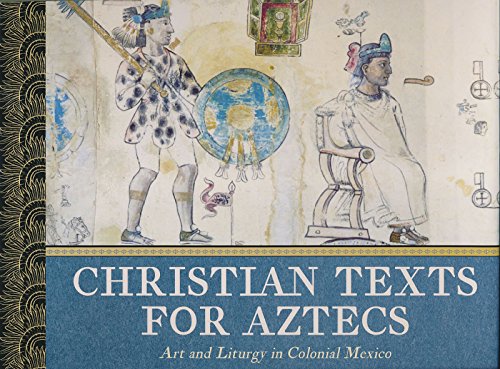 Christian Texts for Aztecs: Art and Liturgy in Colonial Mexico is a cultural history of the missionary enterprise in sixteenth-century Mexico, seen primarily through the work of Catholic missionaries and the native populations, principally the Aztecs. Also known as the Mexica or Nahuas, speakers of the Nahuatl tongue, these Mesoamerican people inhabited the central plateau around Lake Texcoco and the sacred metropolis of Tenochtitlan, the site of present-day Mexico City. It was their language that the mendicant missionaries adopted as the lingua franca of the evangelization enterprise. Conceived as a continuation of his earlier, well-received City, Temple, Stage, Jaime Lara's new work addresses the inculturation of Catholic sacraments and sacramentals into an Aztec worldview in visual and material terms. He argues that Catholic liturgy―similar in some ways to pre-Hispanic worship―effectively "conquered"the religious imagination of its new Mesoamerican practitioners, thus creating the basis for a uniquely Mexican Catholicism. The sixteenth-century friars, in partnership with indigenous Christian converts, successfully translated the Christian message from an exclusively Eurocentric worldview to a system of symbols that made sense to the indigenous civilizations of Central Mexico. While Lara is interested in liturgical texts with novel or recycled metaphors, he is equally interested in visual texts such as neo-Christian architecture, mural painting, feather work, and religious images made from corn. These, he claims, were the sensorial bridges that allowed for a successful, if not wholly orthodox, inculturation of Christianity into the New World. Enriched by more than 280 color images and eleven appendices of translations from Latin and Nahuatl, Lara's study provides rich insights on the development of sacramental practice, popular piety, catechetical drama, and parish politics. Song, dance, flowers, and feathers―of utmost importance in the ancient religion of the Aztecs―were reworked in ingenious ways to serve the Christian cause. Human blood, too, found renewed importance in art and devotion when the indigenous religious leaders and the mendicant friars addressed the fundamental topic of the Man on the cross. An important work on worship, liturgy, and the visual imagination, Christian Texts for Aztecs: Art and Liturgy in Colonial Mexico is a vivid look at a unique cultural adaptation of Christianity. "I have deeply enjoyed and have been intellectually enriched by reading Jaime Lara's Christian Texts for Aztecs: Art and Liturgy in Colonial Mexico. This book will transform how we understand the process of evangelization of Mexico in the sixteenth-century. Clearly written and persuasively argued, Lara reveals how metaphor allows for cross-cultural communication as the deepest level of the Human experience, religious belief. This is demonstrated by a nuanced but richly documented history of the period. Drawing upon architecture, painting and a variety of different kinds of primary sources, this study blends a deep understanding of Aztec religious beliefs so as to articulate the very complex development of Colonial Mexican Christianity. Most importantly, Lara demonstrates how Aztec beliefs and practices were not only incorporated into Catholic teaching and ritual practice, but how they transformed that teaching and practice. Moreover, Lara makes so very evident the centrality of Music and Art in this complicated interaction."―Thomas Cummins, Dumbarton Oaks Professor of the History of Pre-Columbian and Colonial Art, Harvard University. "We have seen many interpretations of the story of the faith in America; some have called it 'black,' and others 'white' or 'grey.' Whatever version one may appropriate, Jaime Lara has provided us with a unique, rich focus: the worship experience of a people called to be renewed by Christianity and the creative expressions of Christian faith in unique images and paintings. Jaime Lara's book is a treasure to cherish for many years, an addition to any personal or public Library, and a legacy that engages readers to embark on a journey in which history, liturgical theology, and good art become one's traveling companions."―Rev. Fr. Juan J. Sosa, Presidente, Instituto Nacional Hispano de Liturgia, Inc.