The Oxford Companion to Philosophy New... (Book published May 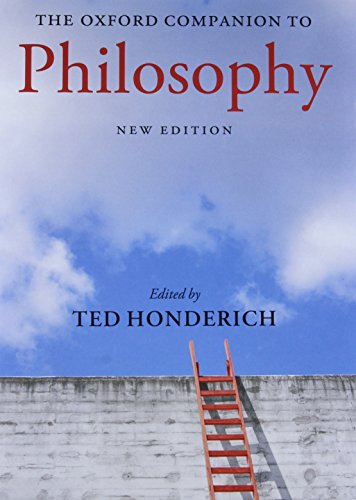 Offering clear and reliable guidance to the ideas of philosophers from antiquity to the present day and to the major philosophical systems around the globe, The Oxford Companion to Philosophy is the definitive philosophical reference work for readers at all levels. For ten years the original volume has served as a stimulating introduction for general readers and as an indispensable guide for students and scholars. A distinguished international assembly of 249 philosophers contributed almost 2,000 entries, and many of these have now been considerably revised and updated in this major new edition; to these are added over 300 brand-new pieces on a fascinating range of current topics such as animal consciousness, cloning, corporate responsibility, the family, globalization, terrorism .

Here is, indeed, a world of thought, with entries on idealism and empiricism, epicureanism and stoicism, passion and emotion, deism and pantheism. The contributors represent a veritable who's who of modern philosophy, including such eminent figures as Isaiah Berlin, Sissela Bok, Ronald Dworkin, John Searle, Michael Walzer, and W. V. Quine. We meet the great thinkers--from Aristotle and Plato, to Augustine and Aquinas, to Descartes and Kant, to Nietzsche and Schopenhauer, right up to contemporary thinkers such as Richard Rorty, Jacques Derrida, Luce Iragaray, and Noam Chomsky. There are short entries on key concepts such as personal identity and the mind-body problem, major doctrines from utilitarianism to Marxism, schools of thought such as the Heidelberg School or the Vienna Circle, and contentious public issues such as abortion, capital punishment, and welfare. In addition, the book offers short explanations of philosophical terms (qualia, supervenience, iff), puzzles (the Achilles paradox, the prisoner's dilemma), and curiosities (the philosopher's stone, slime). Almost every entry is accompanied by suggestions for further reading, and the book includes both a chronological chart of the history of philosophy and a gallery of portraits of eighty eminent philosophers.

An indispensable guide and a constant source of stimulation and enlightenment, The Oxford Companion to Philosophy will appeal to everyone interested in abstract thought, the eternal questions, and the foundations of human understanding.

The concept of Oneness is expressed repeatedly in philosophical works...